Adam "Atom" Willard is the drummer in Patrick Wilson's project The Special Goodness.

Willard is a notable drummer in the punk music scene having played for bands such as Rocket from the Crypt and more recently The Offspring. Recently, he plays drums full-time for Tom Delonge's (of Blink-182 fame) Angels and Airwaves (abbreviated "AVA") project. Willard's drumming style changes significantly for the purpose of AVA's music, employing an expanded drum kit with bells and larger toms/other percussion effects.

Following the release of the The Special Goodness album At Some Point, Birds and Flowers Became Interesting in 2001, Willard joined the band, becoming the second half of its official lineup. He would remain the band's drummer until the release of the 2011 album Natural, which only featured Wilson.

Willard acted as Wilson's drum tech for the the Midget Tour and Enlightenment Tour. He is also credited on Weezer (The Green Album) as a "Drum God"[1] and on Maladroit as a "Drum Bum."[2] At Weezer shows in 2001, Willard played maracas on stage during "Island in the Sun".

In 2008 on the Troublemaker Tour, Angels and Airwaves toured with Weezer alongside Tokyo Police Club, and later The Relationship, to help promote Weezer's Red Album. During Weezer's set, Willard played drums on Rivers Cuomo's drum kit during "Undone" and "Automatic." 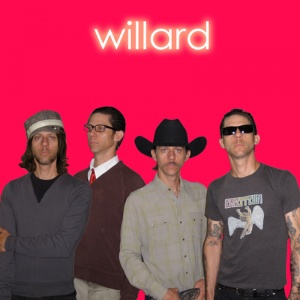 Atom Willard jokingly posing as all members of Weezer as they appear on the cover of The Red Album.