Blur are an English indie/alternative rock band, best known for their hit single "Song 2" (1997) and their media fight against Oasis in the mid-nineties.

Blur was one of the central groups of the Britpop era in the 90's and stated as one of the musically versatile and successful British independent groups of the last 20 years. The resistant line up of Blur is Damon Albarn (vocals,guitar), Graham Coxon (guitar), Alex James (bass) and Dave Rowntree (drums). 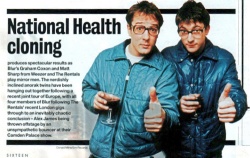