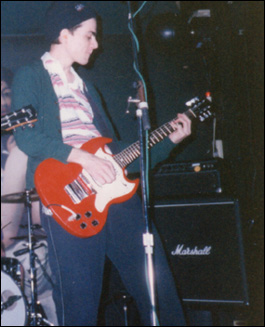 Brian Bell's Equipment has gone through many changes over the years, this page exists to list in detail the equipment that's been used in the past and present. Much of this article is derived and adapted from the old Weezer Equipment History Page on weezer.com and was originally written by Karl Koch. 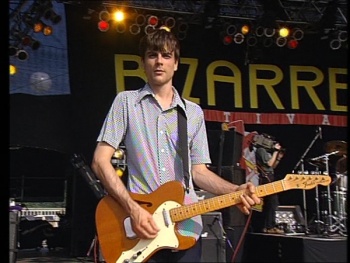 Brian with his Fender Thinline, 1996

Brian playing his Gibson Les Paul Jr. on the music video for The Good Life 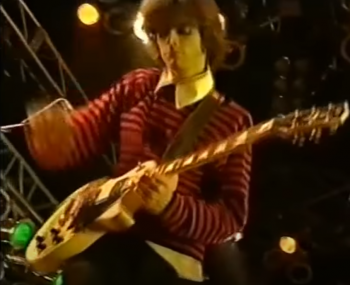 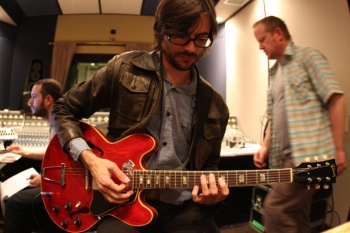 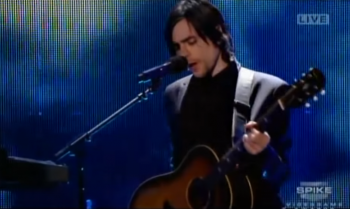 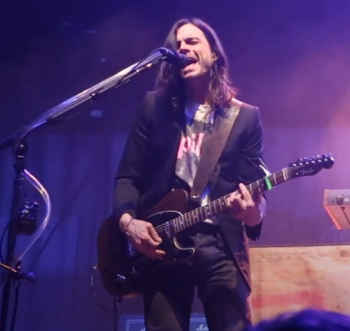 According to Brian on a Guitar World interview in 2017[citation needed], his first guitar was a Ibanez Roadstar II, this line of guitars was discontinued in 1991.

Brian joined the band in the fall of 1993, halfway into the recording of the Blue Album. While none of Brians equipment is included in the album (Rivers re-recorded all of Jason Cropper's parts due to lack of time) he was playing a red 1963 Gibson SG Melody Maker at the time. According to Karl, the SG had a missing tremolo bar assembly and the headstock had the early rectangular shape. The pickups are believed to be Seymour Duncan Hot Rails.

The only modifications this guitar had were the tuning pegs, which Brian had replaced with locking tuners.

During this time Brian would also acquire a yellow Kapa Challenger that would not be used live. According to Karl, the guitar ended up being gifted to Brian's sister.

When both the Red SG and the Travis Bean were stolen from Brian, he picked up a Fender Thinline, which he usually used live for Surf Wax America, among other songs.

In '96, Brian started using a 1996 sunburst Fender Stratocaster which he still uses to this day. He also started using a Gibson Les Paul Jr. Double Cut, which can be seen in the music video for The Good Life.

For the recording of the Green album Brian used Ric Ocaseks 1960 Gibson SG and Bobby Schneck's 1979 Gibson ES-335TD into a Vox AC 30 amp, for Island in the Sun and Knock-down Drag-out.

A Gibson Les Paul Junior Special J-90 in red was used during the Make Believe Tour. Other guitars of this time were the previously used Gibson Les Paul and Brian's Fender Stratocester.

Brian acquired a red Gibson ES-330 with dog tag P90 single coil pickups that started showing up in pictures while the band was recording the Red Album. The guitar showed up again for the live debut of The End of the Game at Jimmy Kimmel Live.

For the 2008 MTV Live session of Thought I Knew we can see Brian playing an Epiphone Hummingbird with an additional pick up over the scarf hole. This guitar also shows up in the Video Game Awards performance of The Greatest Man That Ever Lived.

Brian used a Gibson ES-355 on these tours.

On January 8th Brian shared a picture on Instagram playing a 1954 Gibson J200 acoustic guitar with the caption: Acoustics and espresso... This song is coming along!

During the Weezer Cruise, he started using a Gibson SG Original, and the Gibson SG Explorer previously owned by Rivers Cuomo.

2014: Everything Will Be Alright in the End

Brian used a Gibson Les Paul in sundburst and a Gibson SG in white during that tour. A Gibson Explorer with a silver glitter impact board was also used.

On this tour, Brian is using two Gibson Explorer guitars, a typical Hard Rock guitar. One is white with a black impact board, the other one is completely black with a white impact board. It seems he also used his Fender Telecaster Thinline.

He has also used a sunburst Harmony Rocket H59 from the 60s.

On March 27 Brian uploaded a video to Instagram testing a prototype of a Fender Custom George Harrison Tribute Telecaster, he then posted on April 6th that he bought it and was later seen on the Black Album tour.

On January Brian posted on his Instagram that he acquired a black 58 Les Paul Custom with the caption: It arrived today! A ‘58 Les Paul Custom. I’m thinking of naming her Franny after Luther’s dog. I can’t wait to unleash her (pun not intended) on our upcoming Hella Mega Tour! This guitar can be seen on the official video for Hero

The Sunburst Strat made a comeback and Brian has been using it to play All My Favorite Songs. He mostly uses his two Explorers. 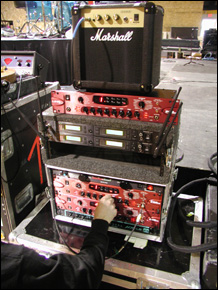 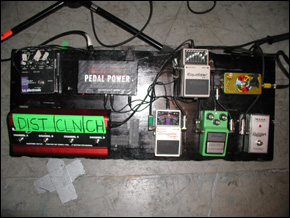 Brian's pedalboard during the Hooptie Tour in 2001.

Brian used a 2x12 Marshall cab and the oddball Mesa Engineering amp that Rivers bought. After Rivers got the Marshall SL-X head, Brian got Rivers' Mesa Enginneering 60-watt (pictured inside the Blue album) as his amp.

Sometime in late 1994, Brian upgraded to a "tall" Marshall 4x12 of almost the exact same vintage and specifications as Rivers'. He also picked up a vintage Marshall head, a MK2 Master Model 100w Lead dating from the late 70's. The head is still used frequently, in recording especially.

To do the clean sounds of "Jonas" and other songs, Brian started splitting his signal, one going to the Mesa [later Marshall], the other going to a vintage early 70's Fender Twin amp, switching back and forth with a footswitch.

For his clean sound, Brian used a Fender Vibro King.

Brian uses the Schure U4D wireless system, but the signal is sent back to his pedal board before going to the POD. Brian's pedalboard routing goes through the POD footswitch, to a ZVEX Super Hard-on into an Ibanez Tube Screamer, into a TC Electronics chorus flanger, into a Boss GE-7 Graphic Equalizer (set for mid frequency boost, used in Tired of Sex), into a Boss TU-2 tuner, used only as a mute switch. Then the signal goes back to the Line 6 POD Pro.

For his clean sound, Brian is set up with the Tweed Blues sound (similar to a Fender Tweed), but modified, with some mid and gain cut out, making it extra clean sounding. The "dirty" sound is the "Brit Hi Gain" sound, which is essentially a hot rodded Marshall jcm 800. Also, for "Crab" and "Hash Pipe", Brian adds some "vomity" flange effect, via the footswitch.

Brian's 2010 pedalboard included 2 Boss tuners (one for electric and one for acoustic), 2 Boss DS Distorions, an Electro-Harmonix Holy Grail Reverb, a Boss FS-5L footswitch and a Dunlop Heil Talk Box.

During the months prior to Hella Mega, Brian uploaded several videos of him playing along Van Weezer and OK Human songs, he later posted a picture of his amp on Instagram with the caption: NERD ALERT: If anyone cares, I’m playing through a cheap solid state amp (not plug ins) with built in distortion. Handle’s customized by yours truly. 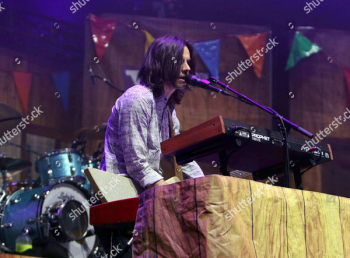 Brian behind both his Nord Stage 2 and his REV2

Brian has used a Nord Stage 2 88-Key Stage Keyboard for most of his piano and synth sounds and started using the Dave Smith Instruments Sequential Prophet REV2 since at least 2018-19.

Brian used GHS Boomer strings, in the TNT gauge, with a wound .24 G string substituted. He has always used Jim Dunlop plain gray pics, from the very thin .38 thickness up to the .73's, usually settling on the .60s.

On July 13th 2017 Ernie Ball announced that they had a partnership with Weezer.