"Crazy Rock n Rollers" (also rendered as "Crazy Rock and Rollers") is a song written by Rivers Cuomo in 1991 and recorded as part of the demo tape Yeastmaster Pt. 2.

In the Weezer Recording History, Karl Koch wrote of the song, "Rivers was starting to explore some new writing style. Not so "giddy", a little more "serious"".

Cuomo uploaded a scan of the handwritten lyrics, dated October 17, 1991, to his personal website in 2002. The song was listed on a spreadsheet Cuomo assembled in the late 2000s titled The 4 and 5 Star Demos of Rivers Cuomo. The song was initially leaked to fans on November 7, 2020 through the demo storefront on riverscuomo.com. It was sold to a user upon the storefront's launch a few days later, on November 11, before being made available for purchase to all as part of the digital compilation Alone V: Before Weezer on November 22. 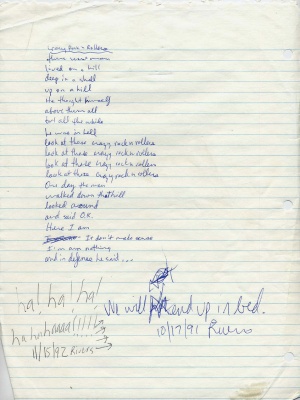 There was a man, lived on a hill
Deep in a shell up on a hill
He thought himself above them all
But all the while he was in hell

One day the man walked down that hill
Looked around and said O.K.
Here I am, it don't make sense
I'm am nothing and in defense he said