Emo (short for emotional and originally emotional hardcore) is a musical genre and subculture that Weezer is often credited with influencing.

A magazine collage of emo style, featuring a reference to Rivers Cuomo of Weezer. Click to see larger. The "geeky glasses" section reads: "With thick frames, of course. Think Weezer's Rivers Cuomo, or your science teacher." Photos by Jesse Frohman.

The culture of emo, which has risen in prominence during the last 10-15 years, is based upon angst and intensive emotionality. A fashion style of black clothing, piercings, prominent eye make-up, and tight jeans (worn by both males and females) is associated with the culture of emo. The musical genre has found a bulk of its popularity amongst a teenage fan base, and bands like My Chemical Romance, Panic! At the Disco, and Dashboard Confessional have perpetuated the movement with the success of their music. Jimmy Eat World, a contemporary of Weezer, is also credited with spurring the emo musical genre.

Weezer's 1996 sophomore album Pinkerton is often cited as one of the first emo albums ever. Pinkerton's angst-ridden lyrical content explores many of the aspects that emo is founded upon. Some of these incude romantic frustration (see "Tired of Sex," "Getchoo," and "Why Bother?"); intense, sincere emotionality (see "Across the Sea," and "Butterfly"); and teenage discomfort (see "El Scorcho," and "Falling For You"). The extensive use of distortion in Pinkerton's production was significantly influential on emo music. Additionally, Weezer lead singer Rivers Cuomo's passionate, severe singing on the album would play a large role in inspiring the scream-sing vocal style that many emo bands became famous for.

Other parts of the Weezer discography that have been classified as emo include "Say It Ain't So" and Weezer's fifth album, Make Believe. 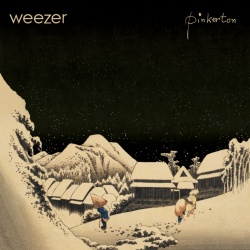 The following album and song reviews classify Weezer as emo:

Scores of modern emo bands have listed Weezer as a major influence upon their music. Some of those bands include Saves the Day, Taking Back Sunday, Deftones, The Ataris, Thursday, The Used, Dashboard Confessional, The Promise Ring, Rye Coalition, The Get Up Kids and Pistolia. A MySpace "Rewind" article from September 2010 quotes Andy Jackson (of emo bands Hot Rod Circuit and Terrible Things) about The Blue Album's influence on emo:

“I still spin The Blue Album. My fiancé, [who] is younger than me, loves it too. I think it’s one of the most important records to our scene and it really influenced us, The Get Up Kids and The Jealous Sound, because it defined a sound.”

An Alternative Press piece on Pinkerton from 2006 features a short essay by Justin Pierre of Motion City Soundtrack about how important the album is to him.

Cuomo briefly addressed Weezer's legacy within the emo community in an interview in 2001. He stated: "I don’t really know what emo means. But apparently I had something to do with it."

Weezer's fans split on the issue of emo. Many dread the thought of classifying Weezer as an "emo band," while some proudly uphold the legacy of the band's early work as emo music. The Urban Dictionary page for Weezer is an example of this debate. "Emo" is the second most popular tag for Weezer on that site. One entry reads:

"An awesome band that got accused of trying to be "emo", because the lead singer wears thick rimmed glasses and writes melody based rock with often sad, emotional lyrics. They're not emo, and people who accuse them of trying to be are lame."

Still another entry lists a contrasting opinion, however:

"A great emo band that's best album is by far their self titled CD, commonly referred to as "The Blue Album". Ignore some of the other idiots who think they are too cool and 'hardcore' for Weezer."