"Gokuh" was a type of song writing experiment. Weezer lead singer Rivers Cuomo, original guitarist Jason Cropper, and drummer Pat Wilson were all given a drum track and set of lyrics recorded by Weezer historian Karl Koch, and instructed to write a song from it. The inspiration for the lyrics came from a Japanese magazine called Gokuh.

Karl Koch's explanation of the song

Karl described the song on the AllThingsWeezer forums in 2008 [1]: 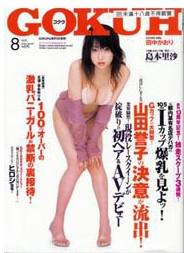 An example of a Gokuh issue.

During a Stickam chat with Albumsix fans, Koch played "Gokuh" in its entirety. No recording is currently known to exist.