the first news about a possible pink triangle single was revealed may 21st during a weezer radio show at KNDD in seattle, washington. the song had been remixed from the original pinkerton lp version, in an attempt to rev it up a bit more. the vocal performance is primarily the same, except for a "oh ho ho" in the slightly different [a few notes] guitar solo. a prominent synth has also been edited into the song. the remix was sent in promo form to radio stations around the country along with a second track containing "pink triangle [acoustic]" from the shorecrest high school show.

as stated during the show, the b-sides for the p.t. single were entitled "getting up and leaving" and "i swear it's true". although not confirmed, it has been said that bassiest scott riebling [letters to cleo] played in place of matt on these tracks only, because matt was in london working on the second rentals lp.

at this point it is a little vague as to what actually happened. it is presumed that since the single didn't do super great that a video was not made and hence an official sinlge was not realeased. originally there was going to be a non-u.s. released single only, but it never appeared on music store shelves. it is presumed that these b-sides have been shelved for possible future single releases. 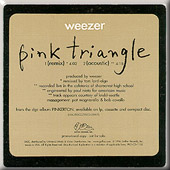 the only current available version of the pink triangle remix is contained on the promo version [see picture above] sent to radio stations. some stores and online companies sold them during the summer in the $8 to $15 price range.

note: a "pink triangle" is an upside-down pink triangle used to denote homosexuals in germany during world war II.