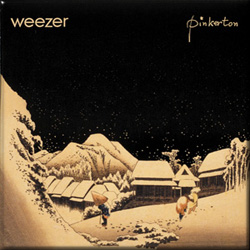 pinkerton, weezer's 2nd effort & album, was released in the fall of 1996 to fairly decent reviews. some columnists stated it was too far a departure from the first upbeat album, and some critics were calling it pure genius. pinkerton was written entirely from rivers cuomo's point of view largely during his stint at school in boston over the winter of 1996.

to be totally correct, 4 songs that later appeared on the l.p. were in reality already written. "tired of sex" dates back to the old school weezer days, and was played during the blue album tour on rare occasions. "getchoo" was quite commenly during the blue album tour as well. "no other one" was written after the blue ablum was released, but not played live (as far as we know). finally, "why bother?" was written post-blue album. we speculate sometime during 1995. as far as we know, it was played live at least once prior to the pinkerton album being released. at the point between the end of the blue album tour, and pinkerton, rivers had also written the songs "waiting on you" & "devotion", both of which were released as b-sides to pinkerton's forthcoming singles. these tracks were laid down at ft. apache up in boston and re-demoed at other studios.

pinkerton is highly influenced from the opera madame butterfl. rivers was having a hard time writing any songs for the new album. at this point he had a brace from leg surgery, and was living prettymuch as a "perverted hermit" as he described in an alternative press interview. painkillers for his operation combined with a letter from a fan in japan were the spark for the rest of the album. based on that fan's letter, rivers wrote "across the sea."

"el scorcho", "falling for you", and the acoustic album closer, "butterfly" soon followed.

with enough songs for a new album, (after meeting the previous summer & christmas), the band reconviened over the summer in california and recorded the album that is now pinkerton. much more emotionally strained and jaged that the s/t first album, weezer was certainly showing its willingness to change.

pinkerton is nothing if not directly related to rivers cuomo's experiences. it's a great album, and not just because cuomo lays himself so emotionally bare as he struggles to come to terms with sex, relationships and masculinity. the band have also added extra heft to the songs since their undeniably catchy and tuneful, but undeniably light-weight, debut two years ago. wilson is a dynamic, propulsive drummer. sharp's rentals side project has given him confidence and helped his bass lines become more complex. bell has considerably toughened the guitar sound.