Posted on Weezer's official Facebook page as part of the "Today in Weezer history" series on November 3, 2013.

Today in Weezer History: 11/03/1996 - Weezer performs in Visalia, CA at the Visalia Convention Center on the Pinkerton Tour. Superdrag opened this show, supporting their debut album "Regretfully Yours". Weezer had actually been to Visalia twice before, playing the bar/club "Cody's" in May and August 1994 before almost anyone had heard of them. They got the shows there because their A&R man Todd Sullivan's brother lived there and set it up. Fast forward to 1996 and the kids who had been to those shows at Cody's had told a LOT of their friends, enough to pack the Convention Center. Karl remembers this show because it was the only show he got electrocuted at - while trying to repair Brian's "Tophat' amplifier during the soundcheck, he touched something he shouldn't have with a screwdriver (the amp was plugged in for some bad reason) and was send flying up onto the drum riser, about 8 feet away. No one realized just why he just leaped through the air like that till it was explained, and Karl didn't even realize how far he flew till he got up. No lasting injuries though (maybe mental? Yeah, mental, definitely). No known photos, but the setlist survives. 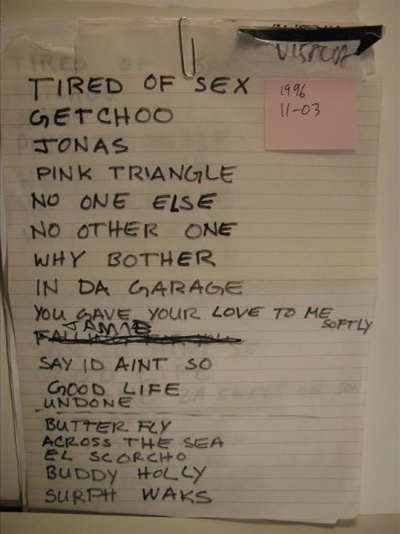