Japan Tour: Osaka: Dan the Lighting Man sez... "We saw our first overcast day today but that didn't dissuade the kids one bit, I think they were even more assed up because of it. The stage was nice and slick due to the condensation, Bobby (Guitarchitecht) took a good spill. Last night we went out for Korean BBQ B-day celebration, sake bombers all around. Finally we have a day off tomorrow, 7 in a row DOWN!!! ...I went to a pet store today and not only did they have pretty kitty and jumpy puppy (one like (Atom's dog) MOSO!), they had 5 different kinds of monkeys, a miniature horse, and some kind of spotted cat that stood about 2 feet high at the shoulder. CRAZY!" 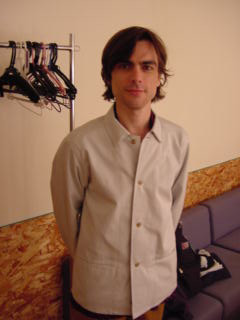 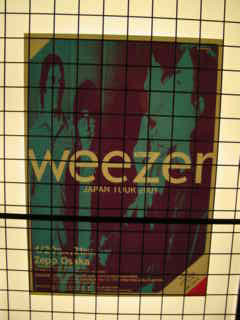 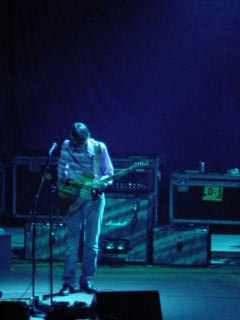 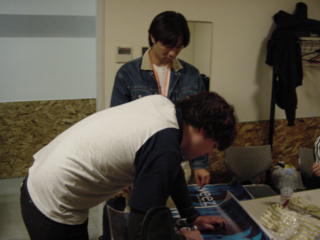 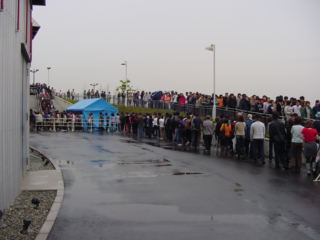 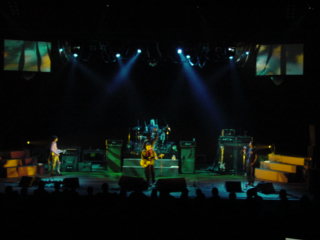 ...Japan Tour Report Addendum: "missing" fan reports! ...as you might recall, I had asked any Japanese tour-goers to email their stories to me at the "other" adress (the "karlophone" one). Unfortunately I had a problem accessing that email for several days (its OK now), so I apologize to these fans for not including them in the last week's reports! here's what they had to say!

4/18:" I went to the Nagoya Diamond Hall show yesterday. I took a day off
to make it because I'm living in Tokyo. I also went to the Blitz show.
Diamond Hall is much smaller than other venues on this tour, but
the band gave us another awesome show. On stage, Rivers made some goofy
conversation with the audience in Japanese and amused us. Well, I'm not
sure you can call it "conversation"... but I think his Japanese
vocabulary have been improved since first time I saw Weezer show in
1996. Anyway, everyone got excited and the band also looked very enjoyed
playing. I think it's enough to say the show was a success!
Oh, I have to mention the =W= light. On this tour, it made the
first appearance in Japan! When the curtain was dropped and the big =W= light was
revealed, it got a great reaction from the audience on both shows which I
attended!
--Ranko Yamamoto


4/18: "I've just attended Weezer concert at Zepp Fukuoka 18th April.
It was a great show. Someone said "too short", but I think it was long
enough for me. Guys looked to be in tune, so we could enjoy the concert.
I wanna go again at any cost if next Japan tour will be held.
And, I think cameras are OK if well concealed or very small. Persons in charge didn't search severely.
I can't understand why cameras are prohibited. In US show, are they
permited or prohibited?

Their gig gave me more and more expectation about new album.
I'm very looking forward to it in Japan.
-- Ryo Nakano.

4/19: "I'm very happy,
because, Brian, Pat and Mikey took pictures with me. And they gave me autographs and (a)
smile!
But Rivers was seen near me. It was very very sad. Tomorrow, I want to talk him!!
Today's show was better than 3 days ago for me.

I think they were tired 3 days ago.
I'm looking forward to tommorrow's show.

4/20: "the show finished.
I think they sang 18 songs. it's more than yesterday.
Mikey was congraturated by everyone, and he was wearing the birthday cake.
Rivers said to us MATA NOCHI HODO after the final song SURF WAX AMERICA. but his
words don't mean "SEE YOU LATER". it's (usually) said before encore. so we were laughing.
I believe they have powerful more and more. I'm glad.
I'm looking forward to the show tommorrow.
--RIE BUNNO.

4/21: "the OSAKA show is finished.
Rivers talked more than ever in JAPANESE. I'm glad.
Mikey wore the same clothes as yesterday.

Brian laughed at me before riding on the car.
Pat threw his TAORU (towel) today, too.
Rivers said to us "I'll go to club STOMP". But I don't go there. Because I don't
see that he is a playboy again.
I believe he became pure.
I'll go to the tour at 25th and 26th in TOKYO."
--RIE BUNNO.

4/22: "I went to weezer's show on April 21st. It looks like that Rivers so tired.
But he was speak so many times on Japanese. After shows, I went to CLUB STOMP in Shinsaibashi.
Because Rivers said "I'll go to CLUB STOMP tonight."

So, He came CLUB STOMP at Midnight.
He gave me his autograph, shake hands, and had a conversation with everyone!
And I can listen to new songs (Photograph, Island in the sun, Don't let go)

4/23: "My name is Akiyoshi and Im sending you a mail to report you that the 20th and 21th concert of Weezer
in Osaka were really successful.
It is undeniable that we (Japanese fans) enjoy the performances. I really
think that new songs were really cool (especially photograph and simple
pages) and there was a (sing-along) chorus among us with the oldies songs.

On the 20th : everyone had gone crazy as they were truly excited. including
me. I have to say that I barely survived through this show as we were
jumping and singing the whole time. Mikey's B'day were very warming and I
wish him a happy 30th B'day!
Pat's bass playing was cool. yeah!
On the 21th : it was a great day as well. Me and my friends were very
excited even though we have seen the show last night. the atmosphere in the
place were really nice and warming as we heard some "MCs" by Rivers. He was
really lovely when he spoke Japanese.

I really regret that I didn't visit Club Stomp after the gig in the 21st !
I mean I really had almost gone to that club. But we werent quite sure of
the location of the club and if Rivers would really appear. I was really
shocked when I learned the facts this morning.....I really missed a big chance
to tell him how much we admire and love him. His personality and music.