05/15/08 the greatest mastering buzznet that ever blendered 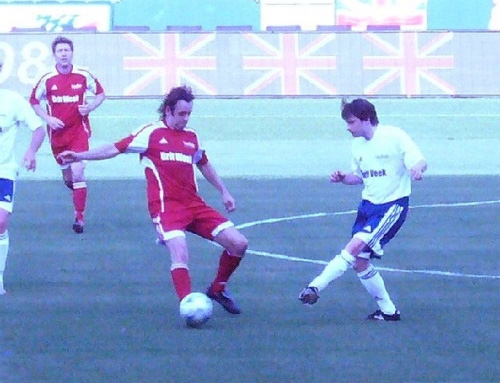 ...People: a reminder about the informative new interview up on Buzznet with Scott. Good stuff!

...Weezer was pleased and relieved to have finished mastering the new album yesterday. They shall sell no wine before it's time, and now all the audio details are set. Finally everything is turned in and assembly can begin at last. June 3, folks!!!

...in the June '08 Blender mag: a funny and informative interview with Pat!

...side note, just FYI: The current single is still "Pork And Beans"! Hear, request, rock out! Meanwhile "The Greatest man That Ever Lived" is our new iTunes single, and those are a bit different as they arent being sent to radio stations, etc. Well, enjoy 'em both!

...Rivers' reborn soccer career continued on May 10, when he was invited to play in the Britnight Showbiz Soccer Game at the Home Depot Center. Rivers again worked hard to prepare for the grueling match, and lots o' fun was had. Thats Rivers battling Welsh actor Michael Sheen in the photo above.

...New extra track info: The UK edition of the Red Album will contain the same 10 songs as the US edition, plus 2 cover songs: renditions of "Life Is What You Make It" by Talk Talk and "The Weight" by The Band. Out in UK 6/9 (digital), 6/16 (physical).

...New physical Deluxe Edition (CD) info: The (USA) Deluxe CD is now scheduled to come out on 6/3, BUT this is not confirmed - it may instead be the following week. We will know soon. Whats for sure is the deluxe edition comes with the additional 4 tracks in a wicked digipak sleeve with a huge booklet packed with exclusive info and beautiful art.

..."Greatest Man" iTunes single clarification: If you order the single now and want the whole album when it comes out, your iTunes will "know" you have it already, and the rest of the album will cost you a dollar less at that time. And if you already preordered the album on itunes and want the single now, you can do this without paying for it twice - Look in your itunes under "Automated Purchases" and it should show the single there for free download - because you already bought it by doing the presale. Or just go to the single page on iTunes and it should say its free for you. At least this is how iTunes explained it to us.