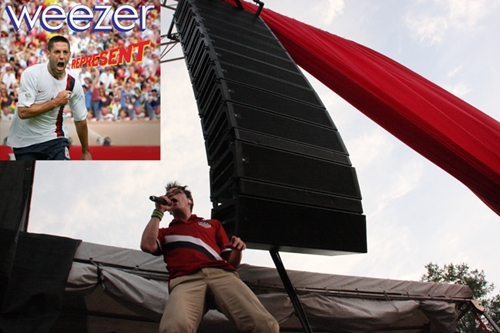 ...Well, here we are at the big bad Bonnaroo festival! Theres so many people here, and so many bands! Wow. Well, more later, time to explore and get ready for the Weezer set... GO TEAM USA!!!

Well, fortunately the satellite was working on the bus, and the day started with watching the World Cup action. First we saw South Korea take out Greece, and then it was on to the big kahuna of the day, USA v. England - their first World Cup match up in 60 years. We settled in and all eyes were glued to the screen for 2 very tense and fun hours. Team USA holding England to a 1-1 draw was pretty cool, I must say. The sheer epicness of soccer at this high level is intense - so much drama, and not just in the LBC!

Later, during warmups in the bus, the band was joined by Julia Nunes, and they ran through the vocal harmonies of "Trippin Down the Freeway", which Julia was slated to join in on during the show. She also prepared the song on her ukulele, and everything seemed to be all set. but during the show, it was discovered her ukulele was not tuned to the right key for the song, so she didn't match any of the other instruments tuning. Oops! Well, we adjusted on the fly and Julia still supplied her soaring vocals to the song, which was pretty sweet all by itself.

Hot summer weather moved in to the Nashville area just in time to make Bonnaroo a 95 degree 100 percent humidity sweaty festival. Which really is as it should be! How else would you have throngs of half naked revelers rocking out with wild abandon? Heat creates rock, its proven. Weezer hit the stage at sundown, and put in an epic performance. Rivers once again pushed the boundaries of what could be climbed, what could be thrown, what could be lifted, and what could be smashed! And the crowd roared like a lion.