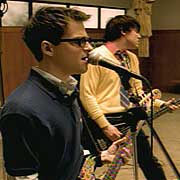 The winning video treatment for Weezer's new single, "Island in the Sun," was one sentence long: "Weezer perform at a Mexican wedding in East Los Angeles."

Director Marcos Siega's concept caught the band's eye in part because — unlike every other video proposal for the yearning, languid track — it didn't have the band performing on an island, Siega said.

It also couldn't have hurt that Siega — known for such videos as Blink-182's "All the Small Things" and Papa Roach's "Last Resort" — helmed the sumo-themed clip for the first single from Weezer (a.k.a. The Green Album), the comeback hit "Hash Pipe" (see "Weezer Smoke 'Hash Pipe' Video With Siega").

Siega hired a wedding coordinator to create an authentic-looking Mexican ceremony in East L.A., cast 50 locals and then plopped Weezer in the middle of it.

In the video, Siega said, Weezer "isn't the wedding band — it's almost as if the wedding becomes a set for them."

The director said he expects to turn the video over to MTV by the end of the week after making a few final edits. Shooting the video may have been relatively easy, but recording the song was an arduous process.

During the sessions for Weezer, producer Ric Ocasek found "Island in the Sun" among a bunch of demos Weezer frontman Rivers Cuomo had made without his bandmates.

"Rivers had recorded 'Island' all by himself, [playing] all of the instruments in his house," bassist Mikey Welsh recalled. "He made this really beautiful little version of it — it was really scrappy sounding and really pretty and kind of melancholy."

The effort that went into re-creating the demo's feel meant that "Island in the Sun" took longer to record than any other song on the album.

"We did it a bunch of times — we kind of tried a bunch of ways," Ocasek said. "The demo did have a good spirit ... because of the way Rivers played drums — [a] loose feeling and everything."

The resulting track's layered, clear-toned guitars and behind-the-beat groove stand out amidst the straight-ahead power-pop on Weezer.

"I really love that one — it seems like a nice summer song," Welsh said.

(For more on Weezer, check out the feature "Weezer: Gang Green" or check out photos from Weezer's June in-store performance in New York.)