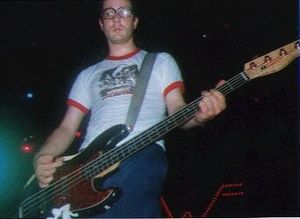 Matt Sharp during the mid 90s

Matt Sharp's Equipment was responsible for Weezer's first two albums, the Blue Album and Pinkerton, and his own band The Rentals. Over the time, Karl Koch made some statements about his equipment. He is left handed, but play right handed. In 2010, he sold a lot of his old equipment stuff from the Weezer time. 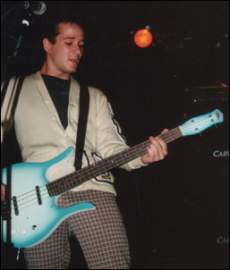 Matt with the Longhorn Bass

One of the first bass models Matt used was a green Jerry Jones Longhorn Bass. Due to its strange shape and other issues, the Longhorn bass was found not to be appropriate during the first live gigs. Matt then decided to change his instrument. 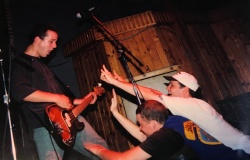 Matt playing with Weezer in 1992

During the recording and the tour for the Blue Album, Matt used a Fender Jazz Bass, a classic bass model.

Karl Koch summarized later "Matt then bought a new Jerry Jones hollow body 'Longhorn' bass, in celeste green. Unfortunately, he soon found out that it wasn't useful in live performance. This is when Matt made the trade for the Warmoth neck. This is a Telecaster Bass style neck, but a little different. A similar but not identical model is still made, but this particular one was an early model and made from a very interesting swirly kind of darker wood, that newer ones just don't have. Though the trade recipient got the whole Explorer Hamer for the neck, he was still quoted as saying, 'You're ripping me off!' The neck was that nice! This neck was grafted onto a vintage black Fender Jazz Bass body he got as a gift from Johnny of El Magnifico. Matt got some Schecter pickups and the 'Frankenstein' bass was complete." 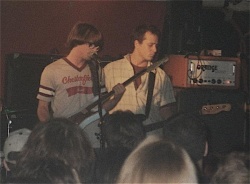 On tour with Fender Jazz Bass and Orange Matamp

Between 1993 and 1994 Matt bought his next bass, a black Gibson Ripper. Karl Koch guesses that this was a result of "trying to get closer to what he wanted". There are no photos of Matt with this instrument.

After Geffen signed the band, Matt bought a blonde '70's Fender Telecaster bass. This bass featured a single large humbucking pickup placed at the very end of the fretboard. Due to the design and placement of the pickup, it produced a very bass-heavy sound that lacked definition.

Karl Koch said of the bass "This one didn't work out too well. 'Too much low end' said Matt. 'It just sounded like a big fart' It was sold. Then Matt tried to replicate the black bass, which was quickly becoming established as an extremely cool bass."

During his early days with Weezer, Matt used two different amplifiers. The first, a Gallien Krueger 800RB, Matt described as sounding "awful and embarrassing". This is the amp Matt used from his early Hardcore Punk times in Arlington until the Mid-90s. During the Pinkerton tour and the Rentals touring, Matt often paired the amp with a Sovtek Big Muff fuzz pedal to add distortion. The second amp was a 200 watt 67' Orange Matamp. Due to the use of fuses of insufficient size, the fuses would regularly "pop" leading to the amp not being used for the Blue Album. It was later damaged on the 1997 US tour at a gig in Richmond.

In 1995, he bought a second Orange Matamp. This 1975 model was used by Matt for recordings and clean sounds during shows. The '75 Matamp was later also damaged, due to a shipping accident. 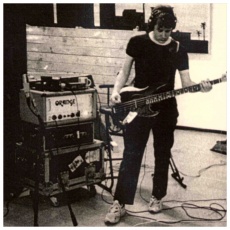 After leaving Weezer, Matt continued using his existing instruments, as well as a Sunburst Fender Precision bass (with white pickup covers) which belonged to Justin of Nerf Herder and a Fender Deluxe Jaguar Bass. Matt used these basses with Rentals and for his solo music.

In 2010, Matt sold a lot of his instruments on eBay. One of his old Orange Matamp's was sold to Greg Veerman from the band San Sebastian.