From Weezerpedia
(Redirected from Mykel and Carli Allen)
Jump to: navigation, search 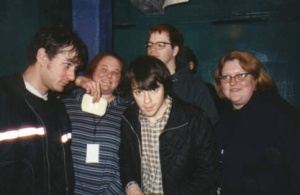 Mykel and Carli Allan were sisters that were friends and supporters of Weezer early in their career. They are considered the biggest Weezer fans of all time. The Weezer song "Mykel & Carli" was written for them.

The Allans became active fans in the early-90s Los Angeles rock club scene. They were early friends and supporters of Weezer as well as several other, mostly LA-based, unknown or unsigned bands of the time.

After befriending Weezer, they were asked to help stuff envelopes full of lyrics and mailing list info for fans who'd written in to the address printed in The Blue Album requesting such info. Their eager help along these lines led to them being the founding members of the Weezer Fan Club. They would henceforth be considered the band's biggest fans, evidenced by the assignment of membership card numbers 0001 and 0002 to them ad infiniti.

Much like Karl Koch, they were friends of the band who remained very grounded, and never forgot what it was like to be a fan, but who just happened to have a special relationship and duties with the band. As one of them said in an email to a fan club member, they regarded Weezer as "friends. They just happened to play music."

In mid-1997, during the latter portion of the Pinkerton tour, the sisters would make a point to show up at as many shows as possible, meeting with fan clubbers. After a July show in Colorado, the sisters (along with their younger sister Trysta) died in a car accident. Little has been released in the way of details, likely out of respect for the family's privacy, but it has been suggested that the driver fell asleep at the wheel, or that the Colorado mountains' icy or treacherous roads played a part, or possibly both. The sisters were expected at the next show or two, but when they failed to meet up at the first show, there was a sense of uneasiness among the Weezer camp. The band eventually found out on route to the next show.

The Allan sisters' impact on the band and their fans is inestimable. For several years from the release of The Blue Album, the sisters developed a unique experience for fans, acting as liasons between them and the band. Fan club get-togethers (sometimes featuring surprise visits from band members) and special mailings to fan club members were the order of the day.

Allthingsweezer boardie and Weezerpedia contributor BringHomeTheTurkey reported that Mykel added his and a friend's names to the guest list at a September 1996 Pinkerton release show at the Whisky A-Go Go in Hollywood, after learning that the fan club members missed out on buying tickets to the show, as they had sold out quickly.

There was a general consensus among fans at the time of the sisters' passing that things would never be the same again - and they were right. Their passing was a contributing factor in the band's nearly three-year-long hiatus that ensued. Koch made a herculean effort to maintain the fan club, but it proved more than he had the time and resources for, and it eventually ceased to exist. The primary reason for this happening was due to the fact that around this time, the internet was exploding, and Koch's involvement with the band's official site more or less supplanted the full necessity of a fan club.

Upon the triumphant return of Weezer in 2000, many fans pondered the return of the fan club. Eventually, the fan club was relaunched by a well-meaning fan, in cooperation with Koch and the band. Though much effort was admirably put forth, the organization failed to gain traction.

Several bands have written songs in honor of the sisters Allan. Most notably, of course, is Weezer's 1994 "Undone" B-side, currently available on the deluxe edition of The Blue Album. Black Market Flowers were the first to write a song called "Mykel and Carli", and in 2001 Jimmy Eat World would release the song "Hear You Me".

On August 15th, 1997, little more than a month after the tragic passing, a tribute concert was held at the Palace Theater in Hollywood, California. All profits from the show went to aid the Allan family in covering the large funeral costs. Weezer headlined the show, which included that dog. (in what would prove to be their final show before disbanding the following month), and Black Market Flowers as the opening act. A special solo performance of the song "Mykel & Carli" by Rivers, preceded by a special greeting to the crowd from the Allans' father Wayne, can be seen on the 2004 DVD Video Capture Device. This show would also prove to be Matt Sharp's final live performance with Weezer.

In late 1997, a tribute album called Hear You Me! A Tribute To Mykel And Carli was released on Vast Records. Featuring songs by many of the sisters' friends and mutual admirers, including both Weezer's and Black Market Flowers' aforementioned tributes, plus rare or exclusive tracks by that dog., Ozma, Kara's Flowers (a short-lived act that evolved into Maroon 5), Shufflepuck, Supersport 2000, and more.

Weezer dedicated 2001's The Green Album to the Allans' memory.