Scott & Rivers played a mini-show at TRiP, a small club/chill dive bar in Santa Monica, CA on January 6, 2014. About 70 fans were in attendance; as was a Japanese camera crew, who were filming the event for a Japanese show to be broadcasted on NHK. After the performance, both Rivers and Scott milled around chatting and taking pics with fans. Random funny note: Rivers had ridden his bicycle there; and as he started getting ready to leave for the night he said "Well, I'm going to be getting on my bike soon". 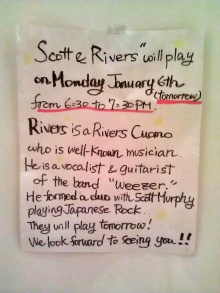