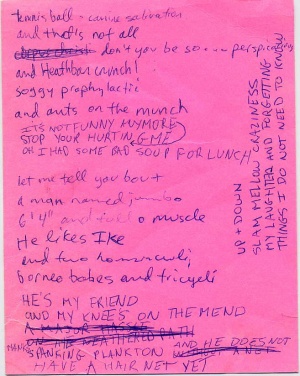 "Scotty's Pullover (Tennis Ball)" (or simply "Tennis Ball") is a song written by Rivers Cuomo and Patrick Wilson and performed by 60 Wrong Sausages in 1991.

Cuomo and Wilson recorded 8-track demos of "Tennis Ball" in July of 1991.[1] The song was rehearsed by 60 Wrong Sausages and performed at the band's only live show, on November 29, 1991.[2] Rivers Cuomo uploaded handwritten lyrics of the song to his website in 2002. The song was first heard by fans when it was released as part of the demo compilation Patrick & Rivers in 2020.

Tennis ball, canine salivation
And that's not all
Don't you be so perspicacious
Heath bar crunch
Soggy prophylactic
And ants on the munch

Stop, you're hurting me
It's not funny anymore
Oh, I had some bad broth