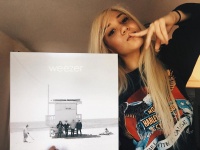 Suzy Shinn is an American producer, songwriter, and engineer based in Los Angeles. She has worked with Weezer on multiple albums.

Shinn is the producer of Weezer's album, Van Weezer, and is the "Suzy" mentioned by name in the lyrics of the album's lead single, "The End of the Game". The name was chosen after brainstorming through other names (including "Jimmy"). She engineered the Weezer version of "Lost in the Woods" for Frozen 2. Her other credits around this time include Weezer's version of "The Simpsons Theme" and The Spongebob Movie: Sponge on the Run song "It's Always Summer in Bikini Bottom".