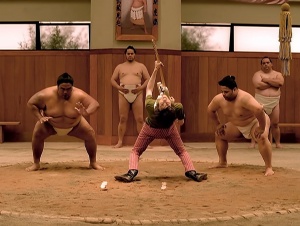 The Impossible Bend is the sassiest rock move of Weezer guitarist Brian Bell. The Impossible Bend's first and only performance was during the "Hash Pipe" music video. It is performed at 2:32. It is unknown if Bell has retained sufficient amounts of sass to complete the move at present, and it is of much heated debate on Weezer forums. Many fans point to Bell's facial hair and claim Bell is still in possession of sass of astounding magnitude. In fact, others will argue that he has since grown sassier, yet also more modest and refuses to pull off the move to attract attention. A small few believe Bell is too old to pull off the bend anymore. An even smaller group of fans believe that it was special effects or CGI, citing "No one could ever pull that off, no matter how sassy they may be." However, extensive evidence confirms that the bend was in fact completed. No such bend has been replicated by another besides Bell.

Many parents, as with Elvis, feel that Brian's move is too sassy and sexy to be shown on public TV. A recent issue of safety also rises as a concern as many instances of amateur Weezer cover bands have been reported to have attempted the bend and fallen off stage. On one fateful event, a guitarist for a cover band was hospitalized when he fell off stage attempting the bend. Bell has been approached to do a late-night HBO cable special featuring the Impossible Bend on an infinite loop. Bell has since declined and could not be reached for comment, although some speculate that artist integrity and spontaneity factored into his declination.

Recently discovered by Weezerpedia user Cupcake, a second enactment of the Impossible Bend may have gone unnoticed by the Weezer community. Although it is clearly not the blatant rejection and violation of the laws of physics that the first Impossible Bend was, Bell's jerky dance move at the 3:04 mark of the "Beverly Hills" music video - viewable above - is generally regarded as evidence for the Bend's revival. The picture clearly shows how invigorating even a lesser version of this sassy move can be, as the onlooking fan to the right of Bell is pleased beyond normal human levels. However, the fan behind Bell is remaining at normal levels of boredom because his unfortunate viewpoint has caused him to miss this historic, Impossible event.

Some fans speculate the Weezer drummer Patrick Wilson has taken to studying Bell's impressive choreographic vision. Seen above at a live show in 2009, Wilson was plainly under some kind of tutelage by Bell at some point, and so far can complete the Impossible Bend to the "Beverly Hills" level. He must undergo more training, however, to master the leg movement of Bell in the full Bend movement. God wish him well.