"The Other Way" is the tenth track from Make Believe. 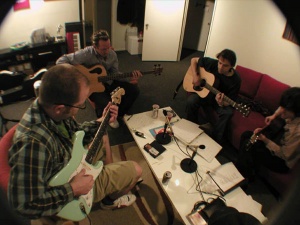 The band recording in their office space

"The Other Way" was written by Rivers Cuomo and demoed acoustically, directly to a Marantz CD burner recorder with Todd Sullivan, on November 8, 2003 at Weezer's office space . Cuomo has described the song as being about the desire to console his former-girlfriend, Jennifer Chiba, after the death of her then-current boyfriend, singer-songwriter Elliott Smith, while questioning his motives for wanting to do so. Smith passed away weeks earlier, from an apparent suicide, on October 21.

Pat: That song sounds like every note is placed exactly where it’s supposed to go, like…it’s one of those songs where nothing sounds out of place, it just sounds great to me.
Rivers: I wrote that song for Jennifer Chiba after Elliott died, and I wanted to console her, but I was confused and skeptical about my own motives for wanting to do so, so I wrote that song about that.

The song continued to be demoed with Rick Rubin on November 28. By February of 2004, the song was on Cuomo's "B-list" of songs in consideration for the album. The song would not be added to the final track list until a year later, around February of 2005, only a few months before the album's release. The album recording features saxophone playing by Jason Freese, the brother of Josh Freese.

I will turn and look the other way