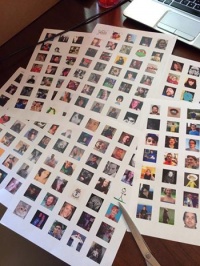 New fan club cards being prepared by Lisa Eubank, with the ID numbers picking up right where they left off from the old days of the club.

The Weezer Fan Club is Weezer's official fan club, originally established by Mykel and Carli Allan in 1994. It came to an end in 1998, but was resurrected in 2002, only to be laid to rest again soon thereafter. In 2014 it was revived once more with the release of Everything Will Be Alright in the End.

When The Blue Album came out in 1994, Geffen would not pay to have the songs' lyrics printed in the CD booklet, as no one had any idea if the then-unknown band's debut would sell very many copies. However, the band insisted that the disc's liner notes list a PO Box address in Los Angeles, to which fans could send a self-addressed, stamped envelope, in order to receive copies of the lyrics. The lyrics were photocopied replicas of Rivers Cuomo's handwriting.

Friends and supporters of the band, the Allan sisters volunteered to help stuff envelopes. The sisters soon noted that the large influx of lyrics requests also included inquiries into the possibility of a fan club. After discussing matters with the band, and going over some financial figures, it was determined that a fan club just might work.

In late 1994, after establishing a mailing list utilizing the database of addresses that requested lyrics, the fledgling club distributed mailers informing the masses of the coming fan club. It promised much for an annual fee of $5. After revising the figure to $10 due to the reality of costs involved, the Allans began taking orders for memberships.

While the Allans were passionate fans of the band, they were not prepared for the wave of membership requests. Eventually, they were able to process all the membership kits, and the club was off and running. At some point in late 1994 or early 1995, the Allans relocated to Oregon, and when The Blue Album was reissued in 1995, with the remix of "Say It Ain't So" in place of the original, the Los Angeles mailing address was replaced with one in Oregon.

There were club-exclusive contests, and exclusive merchandise, such as t-shirts designed by club members.

There were invitations to club-exclusive gatherings, such as a summer 1996 party at the Pasadena, California home of twin sisters Jackie and Kristy. The band was in Los Angeles completing Pinkerton, and the Allans convinced Cuomo and Brian Bell to attend, along with Koch and Patrick Wilson's wife Jennifer.

In the wake of the passing of the Allans in July of 1997, the future of the club was cast into doubt. Karl Koch, a frequent contributor and oft-supporter of the club, made a valiant effort to keep the club running. He managed to keep it alive through late 1998, with the frequency and overall quality of the Weezines in decline. Eventually, with the band's lack of activity, and the increasing importance of the internet, he decided it was best to lay the organization, at least temporarily, to rest.

Many people felt that the Weezer Fan Club was far superior to the average rock band's fan club, which are often run by the record label, or some other corporate entity. It had a much more personal feel, and due to the Allans' relationship with the band, its members felt like they were part of a true club, always one degree of separation from their rock heroes. The band trusted the Allans to make the right calls when it came to club decisions.

After the band's resurgence in the early 2000s, questions began circulating regarding resurrecting the fan club. Koch decided that it was too much for him to take on, considering his then-current duties with the band and its website, but he eventually announced that a fan named Suzanne would take on the responsibility of getting the club back on its feet. The club ran for another year or two, before bowing out a second time.

To coincide with the release of Weezer's 9th studio album, the fan club was revived once again. Now run by Karl Koch and Lisa Eubank, much of the interaction is now done through a Facebook group and the band arranges meet and greets and other ways of bringing the fans closer whenever possible. The fan club numbers pick up right where they had left off, so fans who had been in the original club still retain their ID numbers on the new fan club cards.