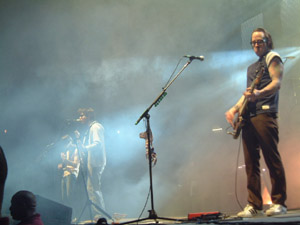 On April 26, 2002 Weezer performed in Vancouver, BC, Canada at the PNE Coliseum on the Dusty West Tour in support of Maladroit. The opening acts were AM Radio and Pete Yorn.

...The show was so much fun tonight. It was like a big party we were playing. Not like an arena at all. I was blown away also I think that was the best set list yet. Or at least for Canada it was.... Scott (Mr. Bass man)

...Amazing show. I can't believe how solid this band has become over the past few months. I saw them in November, and they were great, but after tonight's performance, my respect for the way they are playing live has increased even more. Scott was totally on tonight, and did some sweet ad-libbing between songs and at the end of 'Only In Dreams'. Not to mention his bgvs - the guy can sing! The show was also opened with a short instrumental that had a very cool vibe to it - similar to 'The Dawn' in a way, but more melodic. I later heard that [it was possibly] Scott who wrote it. Good stuff. Rivers was in top form as well, getting into all of the songs and really looking like he was feeling it. His vocal performance was stellar and his solos were tight. Brian as usual (aside from technical difficulties - not his fault) was great, and it was good to see and hear him soloing again on the Pinkerton tunes. Pat was solid on the skins and displayed some wicked guitar riffage at the finale (think Rush). more...So yeah, best show ever. They definitely brought and dropped teh rock on Vancouver.... ---Ridd

...Oh my good lord. RAWKING concert! The highlight of the whole night was weezer playing el scorcho. Technically I was there alone, but during the concert it was like I was with 10000 of my best friends. I'd like to thank all the people who stepped on my feet, kicked me in the head, used me as a stepping stool and the guy who was doing something gross to my back..RAWK(see some of you vancouverians at Weezerfest!) ps. Someone threw my lip gloss on stage, so for the record, it'd look way better on Scott anyway!)... ---Stephanie D

...holy bloody hell, that was a ****** great show!! i was waiting in line since like 1 o'clock. i got to the veune around 12 and walked around for 2 HOURS, then got in line.... waited for like 6 hours or more...anyways, when waiting i heard [a boombox playing] WEEZER's el scorcho and i got so pumped and really wish that they played it. AND THEY ******* DID!! it was great! they opened with dope nose, then photograph, el scorcho, superstar, and something something something....now my ears are still frigging ringing like ****! Rivers said tons of stuff but i cant remember a thing right now. he was so great!! i also threw a cow on stage... and i hope they got it!! i always waved at brian like frantic and HE SMILED AT ME!! oh my god. i love weezer SO MUCH! GREAT SHOW! thanks for everything!!... ---Emerald