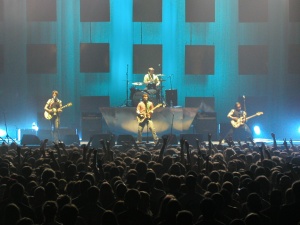 On April 29, 2002 Weezer performed in Missoula, MT at the Adams Center on the Dusty West Tour in support of Maladroit. The opening acts were AM Radio and Pete Yorn.


...Today I was finally able to join up with the Dusty West Tour. I flew in early in the afternoon, after sleeping on the plane sitting up, trying to make up for the 32 minutes of sleep i had gotten prior to the flight that morning. Missoula looked beautiful from the air, snow covered hills all over the place. A friendly collegiate guy was waiting with a University of Montana van to whisk me to the Adams Center, which was basically an overgrown gym that could seat a lot of basketball fans. Or weezer fans...
The Adams Center may have been a bit shy on dressing rooms, but in its favor we managed to dig up a full complement of leisure activites backstage, namely foosball and ping pong. Now everyone wants to bring such items on the road with us! I guess it makes up for the curious sudden lack of powered scooters on tour. Where did they go? I bet as soon as its summertime again the scooters will be back, plus a phalanx of BMX bikes and all sorts of other good ways to get hurt. Personally, Ill stick to my trusty skateboard if I want to get hurt.

...a few of my buddies and i drove up to montana to see weezer and we just wanted to say that it was very enjoyable as oppossed to the last show that we attended in boise idaho. anyways there was so much energy and i could feel the sound through out my whole body. well the trip was well worth it and may i say bitchin.... ---katy, trevor and eamonn from boise

...I was at the show last night in Missoula, Montana, and all I can say is RIGHT ON!!!! That was THE best show I've ever been to. From AM Radio to Weezer itself, it was incredible. Some friends of mine got there and were the first ones in line, and we had a conglomerate emerge. The only downside was the venue doors opened half an hour late, but it was absolutely worth the wait. Well, and they didn't play Don't Let Go. But that's easily overlooked by the AWESOME set... I'm still blown away the next afternoon! I'm also amazed by Pete Yorn. I don't see how anyone could NOT have loved his show... it REALLY got the crowd going here..at least in the middle:) In all, great openers, great set, great show...it was all AWESOME! ---alex

...I was sitting right behind you at the Missoula show last night. If I had known it was you, I would have said hi. I assume that you were the one right behind the mixing board with the video camera. Anyway, do me a favor and tell the Weez thanks for putting on a great show in our sleepy little town. The whole city is still buzzing from it! Last night was my unborn son's first concert. I can't think of a better band for him to hear! ---Tony Moretti

...I just got back from the Missoula show. I go to a lot of concerts, but I have to say that Weezer definitely tops it off. The set was amazing. They played a lot off of Blue and I think i might have heard some stuff off of Maladroit in there too. I think my favorite part was the cover of "Happy Together". It kicked some ass. I hope that Weezer will come back to Montana, cause their performance was definately appreciated. ---Nick

...I attended the Missoula Montana show and let me tell you it ROCKED!!! I had never heard AM Radio before, and I liked thier music, but I thought Pete Yorn should take a hike. Anywayz, the guys totally blew me away! I was at the Boise show last November and let me tell you the guys sounded 100 times better last night than they did then (not saying they didn't rock then). The best part of the show was either A) - Rivers saying "time to take you to the next level" and then busting into El Scorcho!! or B) The guys playing Modern Dukes (love that song!). The music sounded GREAT, Rivers brought his A-game fo shore.... ---ryan