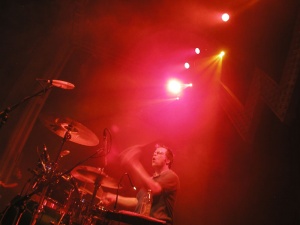 On June 17, 2005 Weezer performed in Glasgow, UK at The Academy on their tour in support of Make Believe. The opening act was The Subways.

...MB '05 Tour: Day 37: Glasgow, Scotland - The Academy
Glasgow. 1. Scottish: local name from the city on the Clyde (first recorded in 1116 as Glasgu), or from either of two minor places with the same name in Aberdeenshire. The etymology of the place name is disputed; it is probably from Welsh glas ‘gray’, ‘green’, ‘blue’ + cau ‘hollows’.

The June Euro Tour (as in, spent a lot of euros this tour) wound up today in Glasgow, which has seen some epic weezer shows in the past, from packed chaos back in the 90's at King Tut's Wah Wah Hut, to the mighty Barrowlands in '02. The Academy (why is every gig in the UK called the Carling Academy?) is a reall cool theater style hall, and filled up to a steamy maximum capacity, with a rather international crowd, with people come in not only from all over the UK nut also from Norway, Ireland, and even the USA and Canada, with a large Toronto contingient.

We had some fun today observing human behavior (as Bjork put it). The academy is sort of in a rough area it seems. There is an inherent toughness in some of these Glaswegians, and the toughest seem to become security guards. These guys are massive and were quite fiesty towards any rabble rousing types they sensed near the club. Combined with a local accent that was easily the hardest of our USA ears to decipher, it made for some really interesting confrontations. Fortunately these guys seemed very well behaved and protective toward the actual fans, so that was cool.

Side note - "nightime" was only 10:30 PM - 4 AM, due to Scotland being so far up north. This reminded us of the Scandanavian shows back in '01 and '02, when the sun only went away for about 30 minutes each night, and was blazing bright by 3 AM. Close those hotel curtains tight if you want to sleep!

At least 5 JONAS members in the line up today, and they all mentioned doing what they could but driving the point home that their abilities were limited without stickers and the like to work with. Spirits were very high regardless.

The show was epic, one of the top 3 of the tour in my opinion. The crowd was mental, and the atmosphere in the club quickly went to hot, steamy, and sweaty. There was one tech glitch, with the lighting control board malfuntioning early on, so that the giant "W" wouldnt light up after about 4 songs. But Lightnin' Leif worked some magic with all the rest of the lights and I dont think people really even noticed that the W wasnt really doing anything. The show concluded with the usual feedback chaos and goodbyes from the stage, but this time was highlighted by Rivers bowing down to the crowd, which definitely freaked out and delighted the fans!

Thanks to everyone who came out on this run!!! Thanks to The Subways and Tegan and Sara, who both rocked! While there are no specific plans yet for weezer to return to Europe, I know that everyone had a blast and considered this to possibly be their best time yet over here. I know I did for sure, and the kindness and enthusiasm of the fans was a major contributing factor. (Thanks to Donna for the 'spy package' today!) So I really hope we can return soon! For now its back to the states, then Japan... then....

Hey Karl! Got back from the weezer show there and i can safely say I have been rocked...Subway were also unexpectedly excellent and i shall definitly be checking them out. Of course weezer were "da bomb!". I was took by surprise by Brian's dancing moves all night, he aint called the sassmaster for no reason. ---anonymous