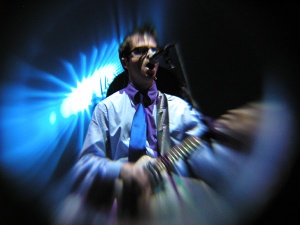 On July 7, 2002 Weezer performed in Denver, CO at the Red Rocks Amphitheater on the Enlightenment Tour in support of Maladroit. The opening acts on the main stage were Sparta and Dashboard Confessional. Loudermilk, Home Town Hero and AM Radio performed on the side stage located at Tulaggi's in Boulder.

The last time weezer was at red rocks, they were opening for No Doubt in a monsoon thunderstorm that cut the set short and nearly killed them.

The equipment was damaged, everyone was soaked and freezing and the legend of what is often called the perfect natural outdoor venue was, to say the least, tarnished in Weezer's eyes.

Just about 5 years later the scene started much the same: a hot clear day in July, a breathtakingly beautiful location, a long line of concert goers snaking down the mountain side waiting to get in, and a bit of shortness of breath from the high altitude. Some nervous jokes were going around that the forcast called for rain that night, apparently a running gag at Red Rocks that those with mememories of '97 didn't find very funny.

But as the afternoon crept on, the 6500+ people poured in, and finally as Sparta hit the stage, a collective sigh of relief was had, as the stars came out proving that no nasty storm cells were on the way. Now this was what a concert at Red Rocks is all about! 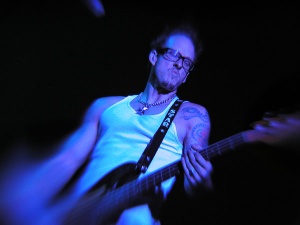 ...I just got home from the show at Red Rocks in Colorado and my throat is absolutely killing me. The music was incredible, but I really was disappointed by the venue. The steps made it nearly impossible to jump/mosh/what have you and the security was super mean. Sparta was pretty good, but the sounds quality was kinda crappy and the vox were really hard to make out. Dashboard was excellent. No complaints there. As usual, I went nuts when Weezer finally hit the stage. I wasn't so sure about the whole "random set list" thing, but it turned out to be killer. Considering I've been to five Weezer shows in the last year and have heard only one song from Pinkerton, I was totally stoked to hear "Why Bother" and "The Good Life". "Death and Destruction" was another highlight of the show...mostly since I could totally relate (i called the guy I was supposed to go to the show with this morning, and he ditched me) *sniff sniff* oh well...his loss! I don't wanna describe the show in complete detail so I'll just say it was absolutely amazing and I still haven't come down the from the natural high I get from Weezer. I can't get Rivers' voice outta my head saying "ah, my good little Creed fans"....he's such a nut. I was also totally stoked to see Karl walking up the big ramp that leads up to the amphitheater before the show...but I think I was the only one that recognized him. I really really wanted to talk to him, but I didn't wanna interupt whatever he was doing. Anyway, to sum up tonight's show in a few simple words....Weezer equals Rock Music!!!! ---Danah M.

...I don't know if you're taking reports for the Denver show yet, but I went tonight and it rocked. Great sound, great venue - Red Rocks is the coolest place in the state to see a show. Seems like they ripped through all the faves at the beginning and then got off onto some new songs. The Hash Pipe encore was awesome, and it was very amusing to see Pat trying to hide behind the drum kit. Brian was having some troubles with his wireless unit and crapped out on a couple of songs, but Rivers' new sound with the Explorers is great. He is using a flanger on every lead part, which was definitely different and cool. And finally - the stunt with the drum riser at the end is grade A, Kiss style rock and roll at its best. I don't want to spoil it for everyone waiting to see the tour, but needless to say, don't leave early - like you were going to. For that matter, don't show up late either - Sparta rocks the house and are need to be seen - they're gonna be big! ---Blake Reid, Boulder, CO