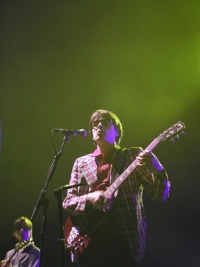 On July 7, 2005 Weezer performed at the Summerfest in Milwaukee, WI at the Marcus Ampitheater on their tour in support of Make Believe. This was the first of 3 co-headlining shows with The Pixies. The opening band was The Fray.


..MB '05 Tour: Day 45: Summerfest at Marcus Ampitheater, Milwaukee WI
The Milwaukee Summerfest is an annual music festival that goes for 10 days or so, and is billed as the largest music festival in the world. Now, I've been to some pretty darn big ones, but I cant refute the claim. You can fit a hell of a lot of music into 10 days. Music like Journey, who played the day before at the same ampitheater. What a time that must have been. The conceptualization, the abstraction, the obtuseness.

Anyway, today was all about The Fray getting it started, followed by the legendary Pixies cramming 25 rapid fire classics into their co-headliner set! Do not underestimate the power of the Pixies, for this power is vast. It is such a joy to actually share the stage with them, after all the years where such a meeting would have been impossible. Tonight's weezer set revisited El Scorcho and Scott nailed "Fall Together" again. Things is runnin' right!

The Pixies were (of course) amazing, but I'm not a huge fan of theirs, so I was just waiting for the Weez. Finally, they came on, and the background (which I thought was pretty cool) was the Make Believe background. I was, however, partially disappointed, for two reasons: 1) they didn't play for very long! They were still great though. 2) There was no Flying "W"! Scott sang lead on "Fall Together." At first, I couldn't really hear him very well because people were cheering so much, but after a while I could, and he is a pretty good singer. This was definitely the second best night of my life. The first was seeing them in Chicago at the Aragon Ballroom. ---Emily D.

If this counts for anything, I was amazed by the Milwaukee show. I just got back and am still recovering my hearing, but I can't get over how awesome tonight was. I'm glad I got to hear El Scorcho and my favorites from Make Believe - Perfect Situation and Haunt You Every Day, and I appreciate the band's effort to get out stuff from every album- including Maladroit, which I still believe is a good CD. The band sounded really confident and well-rehearsed, and Scott rocked on vocals. There is no sign that they are getting old or "rusty" in any way. I loved the way they exited the stage. I also loved the Pixies, although they definitely didn't get the recognition they deserved from the crowd. I would have appreciated the presence of the light-up =w= and The Good Life, but I don't want to be a little bitch. It was amazing either way. Also, I have no idea if you remember or cared or noticed, but we were yelling at you while you were skateboarding by the buses. Rock on and come back soon! ---Nathan S.