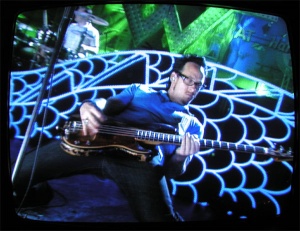 On July 19, 2005 Weezer performed in Orlando, FL at Hard Rock Live on their tour in support of Make Believe. The opening band was The Fray. The show was taped by MTV.

deep in a strange replica of the Roman Colosseum known as Hard Rock Orlando...

Today we rolled over to the Hard Rock Cafe for the live taping of Weezer's Hard Rock Live show for Mtv. Today was odd - a mixture of a regular weezer concert and our surreal friend, the TV taping. Soundcheck consisted of the band running thru the 'hit' songs that Mtv wants to use for the broadcast, so the camera dudes could get their shots planned out. The bands set was set at one hour, which is apparently standard issue for these things, but not all the songs they play will be used for the TV show broadcast. The show will air on Mtv on Aug 3, and (I think) will be a half hour special. The Fray opened as usual, and rocked the house something proper, but as I understand it, they were not taped. So the reality we experienced here at the Hard Rock is not going to exactly match what people will see on TV on 8/3, but thats just how things like this work.

Vocalist Stephanie Eitel joined the band on stage for Beverly Hills. Stephanie is the girl whose voice you hear doing the 'gimmie gimmie's' on the record, and apparently she lives in the area, so the band asked her to join them onstage for the taping, to make it more authentic to the record, and because it was fun! As it turns out, during the encore the band re-did Beverly Hills, as they felt they could do it better than the first time. Seeing as that is one of the songs MTV is going to broadcast, it makes sense that they took the opportunity to give it another shot. By the band's account they were glad they re-did it.

Todays show was the one where we gave away 25 pairs of tickets raffle style via the mailing list, to hook up fans who were burned by the unannounced onsale that went down before we even had the info available for weezer.com. Many happy emails came in from the ticket raffle winners after the show, so that worked out great.

First weez show........and it was amazing. I was about 3-4 rows back the entire time. Very SMALL venue. I thought it would be a lot bigger. I got there around 4ish and stood in line with about 25 other people. We were standing right next to the door. Around 5:30 or so, weezer started their soundcheck and we could hear it perfectly. They played like 5 songs. It was really a surreal moment. You could hear Rivers saying, "yo yo, check check". It was so cool. THe best part was them playing "Breed". We were like, "its Goat Punishment". haha. Good times! - I think all of us sold our soul to MTV. Our local radio DJ read this waiver and stuff. It felt so wrong. haha. O well.
- Kinda of a short set, but im not complaining at all. They defiantly rocked it.
- Stephanie was a nice touch to Bvh, and she was hot. They also played that song twice. When Rivers told the crowd they had to play it twice, a lot of people started booing, but then Rivers was like "c'mon guys"....and of course everyone was...."Yes, Mr. Cuomo....you are god". It was awesome.
- Rivers was defiantly into it. He smiled a lot. And he came close to the edge of the stage at some points, and going towards the camera. It was really cool.
- Brian seemed kinda out of it in the beginning. He really rocked it during his solos though......especially the 2nd Bvh one.
- The encore took forever, something about the lights not working and what not. And probably them arguing to MTV about playing Bvh twice.
- I also encountered 3 a******s in the audience. Trying to mosh to IITS, and just acting like complete morons. You know who you are.
- Surfwax was preetty insanse. Rivers told us, "this is the last song, so make it a crazy one". Oh boy, did we take that to heart. It was awesome! The crowd was defiantly into it. I dont know how other weez crowds are, but we were pretty good I thought.
- During instrumental D&D a lot people tried to sing the words, but no one really could figure them out, or were singing the wrong parts. I found that hilarious.
- I yelled, "Rivers your my hero" in between a song when it was quiet. So you might hear/see me on TV. I also yelled, "Scott! Scott!" He looked over and smiled, and I continued to yell. He just waved and smiled like he was saying......"ok dude, I see you, calm down". It was awesome!
- Rivers looks really healthy up close. Scott is a lot bigger than I thought. Brian and Pat looks the same like you would expect.
- ...By the very end.....Everyone was going crazy. Scott of course was messing around with his pedals. Threw picks into the audience, and he was the last one to leave the stage. Pat picked up Brians guitar, and I thought he was going to play it. But he didnt, i dont know why. He just waved and left. Same with Brian.
All in all, a great performance! Could have been a longer set....I blame MTV. ANd I really wanted to hear Scott on Fall Together but it was cool. Can't wait till the re-broadcast. ---Nishant