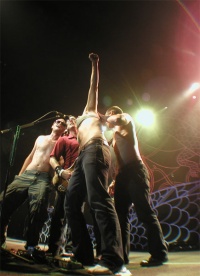 On July 22, 2005 Weezer performed in St. Louis, MO at the Savvis Center on their tour in support of Make Believe. The opening acts were The Fray and Ben Folds.

The Savvis Center is one very nice new arena, where the St. Louis Blues NHL team does their thing, well, will be doing their thing once again now that that dispute has been settled. No disputes in the weez world today though, just 3 bands that are in top form and stoked to be sharing a bill once again. When you roll into the Savvis Center, you really roll into it! We went in to this endless tunnel that somehow wound down and led to backstage, deep underground. We had absolutely no idea where the outside was at that point, so my apologies to anyone out in the line up who was expecting a visit! After soundchecks and a tasty catered dinner, things got underway with the Fray, whose short but sweet set was righteous. Then Ben Folds rocked the hizzouse, including an awesome cover of Dr. Dre's 'B*****s Ain’t ****'!

Tonight was the last show together with The Fray, and as this was their first big tour, they wanted to follow traditions and go out in style, by pranking weezer. Weezer's set rolled along righteously as they have been: big. rock. fun. Then during 'Beverly Hills', a procession of topless (yet bra-ed!) Fray-men invaded the stage, causing breif and extreme confusion untill the weez men realized what was going on (in other words, successful prank!) They sang along to Beverly Hills, doing the 'Gimmie Gimmies' and stripping off their bras, doing handstands, etc. Fun stuff, and a good job catching the headliners off guard. I remember back in '97 on the No Doubt tour, when Brian and Matt successfully pranked Gwen Stefani and co. During the extended breakdown section of one of their songs (they would extend 'Just a Girl' and 'Sunday Morning' for like 15 minutes each), We carried a candle lit table and chairs right out onto the stage behind Gwen as she talked to the audience. Brian and Matt were dressed up formally and brought out newspapers, wine and wine glasses, and proceeded to sit at the table, sip wine and read the paper, acting like nothing was unusual. For once, Gwen was at a loss for words!

Anyway, I digress. Thanks to the Fray for kicking mucho ass this tour, it was short but very sweet! And thanks to Ben Folds for killing it these last 2 nights!