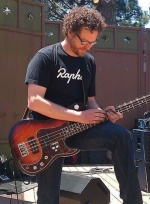 Pat Finn is a Buffalo, NY born musician and artist who founded two pre-Weezer bands - Bush and 60 Wrong Sausages - before pursuing a variety of other musical projects. He is the songwriter and lead vocalist behind Organic Mechanic. He introduced Rivers Cuomo, Pat Wilson, Matt Sharp, Jason Cropper and Karl Koch to each other.

In 1988 Pat moved to Los Angeles from San Francisco, and attended the Musicians Institute. There he met fellow students Matt Sharp as well as (among others) Dave "Burdie Cutlass" Georgeff and Tom "Soda Pop" Gardocki, later members of Wax. After, he returned to Buffalo, NY and stayed there from Summer 1989 - Spring 1990, woodshedding songs and working random jobs, regrouping his plans. While living in Buffalo he met Patrick Wilson, who was working at a music store called Music Mart in the suburb of Amherst, giving drum lessons to youngsters. In March 1990, Finn moved to Los Angeles, and implored Wilson to come with him. Wilson has stated that he knew he had no prospects in the Buffalo area, and was eager to get his music career started, so he instantly and without hesitation accepted Finn's offer, despite having no plan, few possessions, and almost no money. Soon, Finn met Rivers Cuomo while working at Tower Records on Sunset Blvd, later introducing him to Wilson.

In 1998, Finn was invited to play with Weezer as a potential replacement for Matt Sharp. This resulted in a few weeks of hanging out and several rehearsal sessions, but in the end Pat went back to Portland and later Mikey Welsh joined the band. In 2005, he appeared onstage with Weezer during the Foozer Tour in Portland, OR.