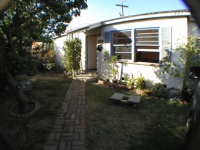 The Amherst House (2226 Amherst Avenue, Los Angeles) was the home of the Weezer members before their formation and well after their first album.

Matt and Rivers moved into the Amherst House on March 19th, 1992, which also marks the first time that Weezer ever played a show (at the Raji's on Hollywood Boulevard). Before that, the band was operating out of 1711 Stoner Avenue in Los Angeles. Before moving into the Amherst House and playing as Weezer, the Stoner Ave. crew was constantly switching around this member with that member to form bands such as The Truth, The Dum Dums, United Dirt, Fuzz, 60 Wrong Sausages and Bush.

On March 19, 1992, Rivers Cuomo, Matt Sharp (fresh from Berkley) and Justin Fisher moved into the Amherst house. They convinced the Asian land lords that they were UCLA film students and therefore would make a lot of noise. On that day, Weezer's first show suddenly fell into their laps. Before the show, Weezer began brainstorming various names for their unnamed band. Early suggestions for band names included, "The Big Jones" and "This Niblet". Additionally, the names "Meathead", "Outhouse", "Hummingbird" and other random names are written on early Weezer demo tapes.