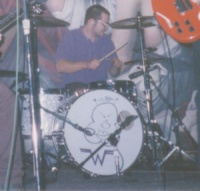 "The origin of Bokkus is shrouded in mystery." - Karl Koch

Bokkus is a character created by Pat Wilson and drawn on the bass drumhead of the drum set that appeared in the garage photo on the inside of the Blue Album. 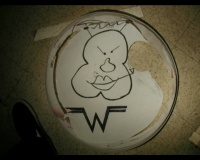 The original drum head as of the Memories Tour in 2010.
Instead of doing it correctly, they went off the rails and abandoned the Spider-Man plot all-together in favor of their own story called Space Violators. The very first appearance of Bokkus depicts him as a crazed alien who comes to Middle America to create havoc and "chase the farmer's daughter."

Pat originally drew the "Bokkus" character on the backside of a drum head while recording the Blue Album at Electric Lady Studios, where it hung on the studio wall as decoration. Later, when he decided to use the head, he traced Bokkus onto the outside of the head, only to discover that the hole cut to accommodate microphones is right where Bokkus' pipe was, so the pipe is squashed below the hole. This led to people thinking Bokkus is blowing a big bubble out of his pipe.

After some touring the head was cut out and saved by Karl Koch. He then used the original head to trace a copy on paper which was used to recreate several new Bokkus heads for use on the Memories Tour.