"Goodbye West Coast" is a song written by Matt Sharp.

A short edit of the song first appeared on the solo EP Puckett's Versus the Country Boy in 2003. The full-length song appeared on Sharp's eponymous album the following year.

During the concert in which Sharp publicly reunited with Rivers Cuomo in 2004, the two performed the Weezer track "Undone (The Sweater Song)". Before the song, Sharp recalled an anecdote in which a attendee of one of his concerts remarked that "Goodbye West Coast" sounded "exactly like the Sweater Song". 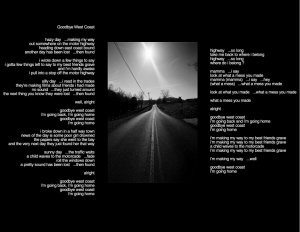 Lyric sheet made by Bryan Bos, with photographs by Sharp

Hazy day, making my way
Out somewhere on the motor highway
Heading down, east coast-bound
Another day's been lost and found

I wrote down a few things to say
Got a few things left to say to my best friend's grave
And I'm hardly awake
I pull into a stop off the motor highway
Silly day, I read in the trades
They're makin' films about friends I'd made
No sound, they just turned around
The next thing you know they were lost then found
Alright

I broke down in a halfway town
News of the day is some poor girl drowned
The papers say she went to the bay
The very next day they just found her that way
Sunny day, traffic waits
Child waves to the motorcade, fade
Ah, the window's down
A pretty sound's been lost then found