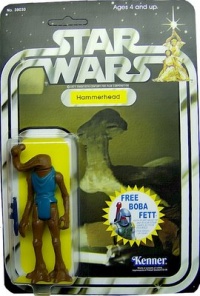 Hammerhead is an Ithorian character from the movie Star Wars, featured on-screen for less than 5 seconds.

Excerpt from Karl Koch's The Story of Making the Blue Album:

Back in 1992, Rivers Cuomo and Matt Sharp had made the acquaintance of one Brian Bell, who was then playing with Carnival Art. Brian expressed his fondness of Weezer and Matt and Rivers told Brian that he rocked. A bond was formed that wasn't tested till almost a year later, when Matt and Rivers called Brian up from NYC:

The Star Wars question was deemed essential, as the wrong reaction would brand Brian as someone who didn't "get it". There was a distinct worry at this critical point about having someone who didn't share the generational and suburban culture (or lack thereof) that was the one thing the guys knew they had in common.