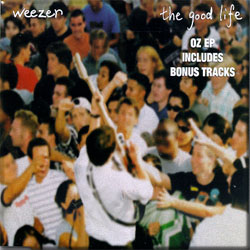 the good life single was relased as the 2nd from weezer's second album, pinkerton. the song was written based on rivers experience over a winter at school in boston. "the good life" is all about how the singer is tired of being a hermit bum that wants to rock out and get friendly with the ladies once again. the single itself was delayed a few times for reasons unknown. initially, a 3 song cd single was released only in japan. the single contained "the good life", "waiting on you", and a duet with rachel haden (formerly of that dog.) on "i just threw out the love of my dreams". the single insert contains "the good life" lyrics printed in japanese on the inside cover, along with an outside yellow paper insert explaining the product in japanese.

a few months later the more familiar "the good life oz ep" was released. this cd single contained the 3 tracks mentioned above, in addition to pink triangle (acoustic) and "the good life" (acoustic) from the shorecrest high school show .

both singles contain the same interesting artwork. the cover photograph was taken at the first pinkerton era tour show, at the tower records show in los angeles. the inset cover is an xray of the leg bone that rivers had surgery on.