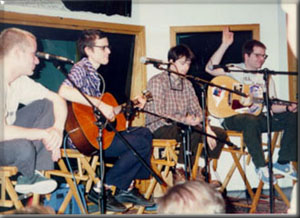 during their current tour, the boys of weezer made a stop at the cats paw studios to perform an acoutic set in front of a small audience. the format, was the usual for acoustic sets (rivers: vocals/guitar/harmonica, matt: vocals, brian: guitar/vocals, pat: guitar)

The songs were recorded by atlanta's resident alternative rock station 99x, and the later two of them ("no one else" & "jamie") appeared as b-sides on forgeign versions of the "say it ain't so" single (issued the following summer).

-thanks to the owner of this pic for usage.