shortly after finishing another round of overseas and us dates, and hot off the buzz of the "buddy holly" video, weezer figured it was time for the 3rd video. after working with spike jonze for two videos, the band decided to try a different director, sophie muller, known for videos by blur [song 2], no doubt [don't speak], and the eurithmyics [various].

this time, "say it ain't so" was filmed at the Amherst House [in los angeles, california]-- home of the legendary garage pictured in the inset of the blue album. the calm yet rocking tone fits the song well. the video did well on mtv & radio and helped to further introduce the likes of "rock =w= music" to the masses. 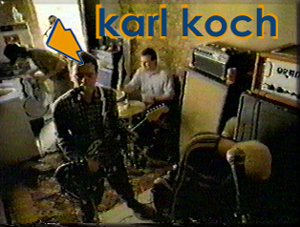 karl koch, roadie supreme, makes an appearance in the video, doing the laundry. also of note: brian's stormtrooper t-shirt is a bootleg from canada. it is, in fact, ocean spray that is drunk at the end of the video by cuomo. the picture on the laundry machine is peter "the cat" criss of 70's rock goliath kiss.