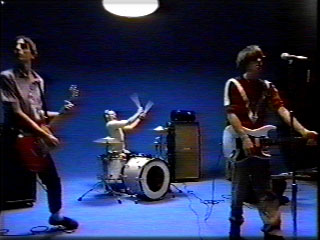 perhaps the single most remarkable day of the entire weezer experience was when we shot the video for "undone-the sweater song." this was not day we were looking forward to. until they put our video into buzz bin, we all hated mtv. it seems like a shame to confine a song to one interpretation. for example, i'll never hear aerosmith's "cryin" again without thinking about that lame chick bungee-jumping off the bridge. 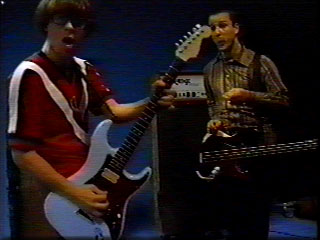 but our single was "shooting up the charts" and the record company thought it would be a "smash" if it had a video. we reluctantly assented under the condition that there not be one sweater, or anything resembling a sweater, anywhere in the video. the video department solicited "treatments" from at least twenty-five directors and sent us their ideas on a computer-printed scroll that stretched at least eight times around the considerable girth of betsy. and every single idea featured - you guess it - a sweater. whether we were playing in a sweater factory, knitting a gigantic sweater, or blowing up a sweater with five megatons of tnt, every single director had his or own vision of the great sweater. nauseated, we almost gave up on doing a video - until we got a call from the messiah of videomaking, spike jonze. we hastily agreed upon a vague plan involving a blue room, a pack of dogs, and couple of guys hanging upside down from the ceiling.

the vague plan ended up costing us $60,000. somehow, spike took a video with no editing, no cast, and no set of speak of, and gave it a budget i would have thought purchased major explosions, extraordinarily beautiful women, and hammer-like choreography. but no, we got an empty warehouse and a pack of dogs. apparently $60,000 is only an average price for a video these days.

when we started shooting, i had that terrible feeling of regret that comes only when one sees dollar signs floating uncontrollably skyward. everything was going wrong. first of all, in order to achieve the slow-motion effect that makes the video so dreamy, we had to perform the song twice as fast as normal. this also means we had to sing like the chipmunks. the cameraman had to run around the set twice as fast as it appears he did, while wearing this immense apparatus known as the steadicam. following him were a number of assistants, and behind them, spike, yelling commands at the camera man, the lighting guy, and me. the cameraman was yelling commands at the assistants, who were in turn yelling at each other. and then the dogs ran in. at double speed. across the set from the dogs were the trainers, all yelling at the dogs: "buddy! scrappy! here, buffy! good doggy!" the dogs got so confused by all the screaming and the monitors blasting the chipmunks version of "the sweater song" that they turned around and ran directly away from the band. the trainers, in an amazing display of ignorance, told us we had to turn down our instruments because we were "scarying scrappy." so we pretended to turn down the instruments (which weren't even plugged in) and continued on.

well, after playing "the sweater song" twenty times in a row at high speed, singing along in our best chipmunks voices, with the cameraman, spike, the assistants and the dogs all running around us yelling and barking and charing us $60,000, it stated to get a little depressing. in an act of great symbolism, one of the cute little dogs sauntered up and took a crap on pat's bass drum pedal. the dog's trainer apologized profusely, but something snapped inside us. a dog had crapped on our $60,000 video. 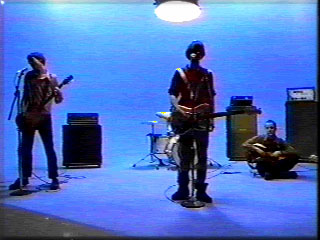 from that point on, our lip-synching wasn't quite as accurate. matt would take time out from playing the bass to snap his fingers or to sit down. despite the importance everyone placed on it, we didn't care about our video anymore. we saw it not as a significant work of art depicting the anguish of generation x, but as it truly is: a piece of dog shit.
-written by rivers cuomo

excerpt taken from the january 1995 issue of details magazine