as the world domination tour slowly crawled to its end, weezer was asked to make an appearance on the popular "late show with david letterman". the band promoted their 3rd single, by playing "say it ain't so". 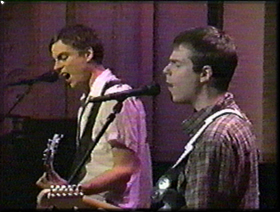 notable points of the show: rivers continued to play hard even in the confines of a metal leg cage. brian played, for what would be one of the last appearances on tv, his vintage red gibson sg (later to be stolen from his car). 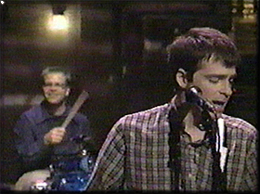 pat wore a blue rain jacket to match his bright green hair and his smashing sparkely blue drum kit. dyed black hair matt, made the point to jump around a lot for the kiddies watching at home in their pajamas. 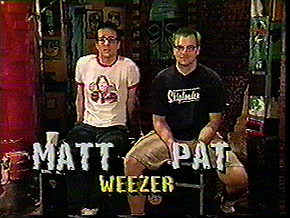 also that day (presumed to be earlier), matt and pat made a trip over to the mtv studios in new york. this was =w='s 2nd live appearance on 120 minutes (the first was a performance), this time to "special guest host" the show. feeling especially saucy, matt and pat hosted several new videos by the likes of the john spencer blues explosion, hum, and a live performance by the verve.