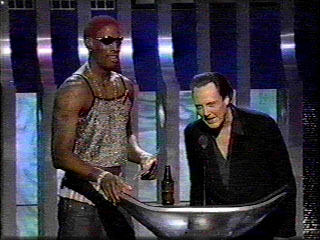 weezer took home 4 awards this night, including the biggie for best alternative video. as you can tell from these video captures, not all the members of the band were there. these 3 guys you probably didn't recognize at the time were karl koch [maybe you did recognize him if you'd been to a show before], pat finn [good friend of the band, the man responsible for the members all hooking up, and all around cool guy] and spike jonze [director of the video]. rivers couldn't make it to the show that evening, and pat didn't feel like dealing with the whole thing. 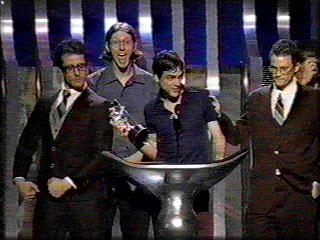 brian thanks various people who helped with the video as matt flexes for the ladies. after a few seconds, matt cuts in using his "rentals persona"...perhaps using the stage to get the world ready for his band the rentals. in his best eastern european accent, he thanks everyone for their support and tries to get everyone in the crowd to cheer for the great spike jonze. as brian heads away from the microphone, he thanks the fans. 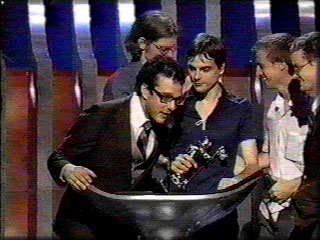