Posted on Weezer's official Facebook page as part of the "Today in Weezer History" series on November 5, 2013.

11/05/1992 - Weezer works on their third demo tape. This was the second of a 2 day session at a garage studio in Hollywood, a few blocks off of La Brea and Olympic Blvd in a residential area. Jon Pikus (misspelled "Pickus" on the tape) of the band El Magnifico (and later the Campfire Girls and a Interscope A+R guy) was a fledgling engineer and offered to record Weezer's 3rd demo tape in a garage studio of an aquaintance of his who was convieniently out of town. Normally Jon would not have been allowed to use the studio, nor let in Weezer and Karl to work in it for free! But rules were broken, as the other residents of the shared house looked the other way (away from the backyard and the garage) and pretended not to hear the racket. The band had done demo tapes twice before, a 3 song tape in the speing of '92, and "The Kitchen Tapes" which were originally intended as an indie album but parts of which ended up being used for a second demo.

This tape had 4 songs: No One Else, The World Has Turned, Say It Ain't So, and Undone. Surf Wax was also attempted but wasn't considered as good a recording, and made it onto the B-side of some cassettes - for friends only. Undone features samples by Karl off of vinyl LPs, from Star Wars, The Hobbit, etc.

The tape was considered good enough to really try and shop around to labels. 3 printings of it were made at a place called Quality Clones in Hollywood, the labels were blue, then green, then yellow. There were about 100 made of each. Surf Wax was only put on a few of the 'blue' ones. These tapes are extremely hard to locate today, but the audio content had been bootlegged on mp3 for years - audio quality levels vary wildly however. 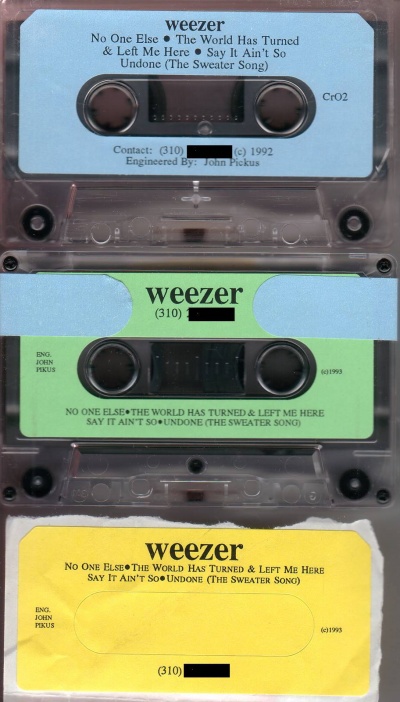