...weezer in space!
On Thursday, Jan 16th, Space Shuttle mission STS-107 is slated to lift off at 10:39 a.m. EST for a 16 day orbital mission. Why is this weezer news? Well, this missions pilot is Cmdr. William McCool, USN, who [besides having a pretty fresh name for an astronaut], happens to be a big weezer fan. William brought his kids to the Enlightenment Tour when it hit Texas last summer, and hes bringing his copy of the blue album up in space with him as one of his personal items. Shuttle astronauts are only allowed a handful of small items for personal use while on a mission, so Commander McCool thought he better bring something worthy! William explained that he would attempt to get a good photo of ol' Blue, floating with Big 'Ol Blue [er, Earth], so we're keeping our fingers crossed. Best wishes to the crew and support teams of STS-107! 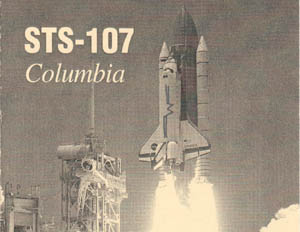