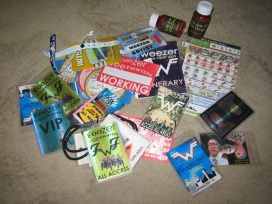 ...hello all, and I start with an apology about the delay of the holiday treat. The treat is ready to go and has been for a while now, but I've been forced to cool it until some issues have been dealt with. Not tech issues, just 'suit-and-tie' stuff thats beyond my reach to speed up. Im waiting on word because there is a chance the treat I made will have to be replaced with something else - but do not fret, it will be cool either way, not a re-hash or random goofiness. I realize this isnt the first time that you the loyal =w= fans have been asked to chill and be patient, and it was never my intention to cause another waiting game sitution. I have been dying to share the fun for 2 weeks now, but I, like you must wait and see.

...reminder: tomorrow! - Scott Shriner's MC'ing this months installment of Rock N' Roll bingo, a charity bingo series where rock stars, celebrities, and other cool cats volunteer their time and bingo refereeing skillz for charity. Scott will be calling out the numbers on the night of Jan 19th in Hollywood. Check the details here.
Please note - this is not a musical performance - Scott will not be playing bass or any other instrument, aside from his, er, bingo voice. Come down for fun and to support the charity, and perhaps Scott's number calling will hook you up with a bingo victory!

...*updated* speaking of Scott, if you are attending this year's NAMM show in Anahiem, you might want to stop by the Ampeg booth to meet the Shrine-dog and get a exclusive color picture signed in person...Scott will be there along with Tom Araya (bass and vocals for Slayer!), on Saturday Jan 21 from 1-2 PM.

...if you haven't peeked at Pat's The Special Goodness site, do so now for, uh, 'Pat as John Cale', in "Factory Girl".

...'Make Believe' was recently awarded the RIAA's platinum sales award (1 million+ units scanned at retail, from CD, LP, and digital sales), the first Weezer album to do this since The Green Album did it in 2001. Thanks to all who believed in the Weez in '05! Make Believe jumped back up to a respectable #74 last week, beating the curve during the holiday rush after 34 weeks on the chart. And meanwhile, it looks like 'Beverly Hills' was the second most downloaded track on iTunes in '05...right behind 'Hollaback Girl'!?! Holy cow! (hat tip: Ron W.) Not to over-toot the ol' horn or anything, but this sort of success is a real blessing given all the mystery and uncertainty that preceeded the creation and release of the album. Kudos.

...reminder time - please vote for "Perfect Situation" on the TRL webpage. Your vote counts! The single is holding steady at #4 on the modern rock chart, and has finally cracked the top 50 on the Digital Songs chart!
I was told the "Perfect Situation" video would be available on iTunes by now, but I don't see it yet. It's also coming to our streaming media page sometime soon (yes, a lot later than I was originally informed, sorry), but don't know when yet. It's still available to stream on the Yahoo! Music pages. (best in IE, Firefox doesnt seem to like it).

...coming up on Feb 8: The Grammys. "Beverly Hills" has been nominated in the Best Rock Song catergory for the 2006 Grammy Awards, up against U2, Foo Fighters, Coldplay, and Bruce Springsteen. The Grammy Awards take place on Feb 8th at the Staples Center in L.A.

...Ozma, the band Rivers has been quoted as saying "beat me at my own game", is back! Check it out!