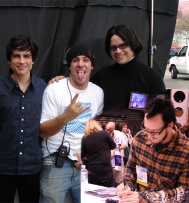 *update - check out the VH1 Top 20 Video Countdown, which is currently airing this weekend (Friday at 6pm, Sat. 9am, Sun. 8am). It includes a "fairly informative" interview with Pat Wilson about the future of =w= and related things.

...Chart attack! 'Perfect Situation' was #1 on the Modern Rock chart for the second week in a row this week, and rumor has it it may hold on for week #3 as well! Thanks to everyone for your support and requests! This is the second single from 'Make Believe' to hit the Modern Rock #1 spot, which (I think) is the first time Weezer has done that with 2 songs from the same album. Packed with rock, Make Believe really satisfies. Huh? Anyway, PS has also popped up on the Pop 100 fighting with the radio juggernauts, trying to join Beverly Hills in the rarified world of the top 40. And it's up to #36 on the Digital Songs chart!

...todays photo (Large size picture link: here)is a collage, showing Brian as Lou Reed and Pat as John Cale with fan/film crew guy Scott, a few weeks ago in Shreveport, LA where they were being filmed as part of The Velvet Underground in '65, on the set of "Factory Girl". Meanwhile, lower right is Scott, signing at the NAMM show last Saturday, Jan 21. Factory Girl photo courtesy Nathan P., NAMM show pic courtesy Nancy Yim. (note - to answer some questions that have been coming in - Pat and Brian are the only members of weezer who will be apperaing in the film, the rest of the 'Velvet Underground and Nico' are played by others. *updated info* Brian and Pat's new recording of the VU's "Heroin" is slated to be included in the film, as the song they will be performing in the scen as The Velvet Underground.

We were originally informed that Scott would be signing with none other than Tom Araya, vocals and bass of Slayer, but Tom couldnt make it and C.C. Deville of Poison came in instead! Scott says: "...That was funny because I have actually jammed with [C.C.] about 15 years ago. He was a wild man, really nuts. The people I met were great, and a big thanks and shout out to all the =W= fans that stopped by or introduced themselves to me throughout the day. Big fun."
Pat also came on down to NAMM, hanging with Scott for a while, saying hi to the fans and and seeing what was up with the hot new equipment on display at the show.

...Scott also wanted to say thanks to all who came down to the Rock N' Roll bingo event he MC'd on 1/19. Scott: "...Bingo was a great success!!! Raised over $600 for the [Silverlake Conservatory] School. Want to put a thanks out for the =W= fans that came and supported."

...rumor dispelling dep't: some claim to have heard whisperings of Weezer being scheduled to play Belgium's Werchter Festival later in '06, but sorry folks, it's just not true.

...(still) coming up on Feb 8: The Grammys. "Beverly Hills" has been nominated in the Best Rock Song catergory for the 2006 Grammy Awards, up against U2, Foo Fighters, Coldplay, and Bruce Springsteen. The Grammy Awards take place on Feb 8th at the Staples Center in L.A.

...reminder time - please vote for "Perfect Situation" on the TRL webpage. Your vote counts! Watch the video over on Yahoo! Music - click the Elisha banner to the left, and please, after you watch, rank it!