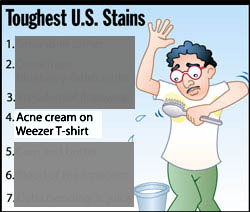 ...thanks to everyone whos sent in photos, artwork or strange but true weez stories. Since the fans' stuff page was revamped a little while back, new submissions have come in fast, and its about time to update again....so if youve contributed recently, keep an eye peeled for your submission. 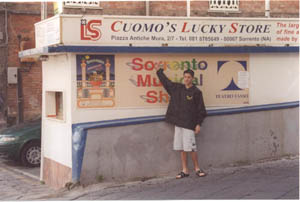 ...also looming on the horizon is the long awaited re-vamp of the equipment pages and the ongoing project of adding a ton of stuff to the super chrono. [some stuff in 1991 already, tons of neat + previously unseen stuff headed for the 1992 section asap, - then 1993, etc.] Thanks for your patience, its our goal to always be improving the site and adding stuff.

here there and everywhere...

Guitar man Brian Bell has been added to EverythingSG's listing of Gibson SG players. The listing [found in the "celebrities" section of the site] quotes from Bri's self penned weezer.com bio. Brian's got a album of his own up his sleeve, as does drummer man Patrick Wilson.

Minneapolis, MN: today there was a cover song contest at the 7th St. Entry club. Competing was "Blue Weezer Cult", a unique amalgam of Weezer and Blue Oyster Cult covers! bWc features members of UberScenester, PopCycle, The Bee Family and Kruddler. Did the crowd fear their "Dont Fear the Sweater" song? We await some results...

Matt C.'s crazy idea: "...using google, i searched under "(band name) rules/sucks". whoever had more rules then sucks won. here are the results..."

Who? What? The bazooka was who?
So...what is this string quartet tribute to weezer? Who is doing it? whats on it? Why is it for sale if no one knows these things? We dont know. So there you have it.

"If you don't own Weezer's green album, go get it. It's a revolutionary synthesis of punk and pop and features the best first four songs on an album since U2's last release." - David Fleming, from his“Super Bowl Diary” on ESPN.com.