...the word from France! a fan writes: "...island in the sun can be heard everywhere here!! indeed ,every radio station -i mean every single one, even the crappy or the old peoples ones- are playing the song!! that's crazy, we're not used to such a thing [here]...also, there has been a 3000 limited copy edition of the green album out after christmas including a promo cd w/crab+dont let go live and always. in the cd you can find a "come on and KICK ME" green sticker; pretty cool! ...except that they release it 8 months after real fans have bought it, and it really sucks...the [...] record company should give goodies to the ones who buy first..." ---pascal, marseille

...we're going to North Carolina tomorrow, to start The Hyper Extended Midget Tour! This tour will be the 3rd and final installment in the "midget" tour saga that began last September. When next we tour North America, we promise to have thought of a new name for the tour!

...Today Rivers was holed up at a studio making some changes to several songs. Once the band has "lived with" the new recordings for a little while, ideas for improvements start to flow, and today they were flowing. Of course, in between all the work, there were other things going on late at night in the studio! See the AV page for a new mini video clip, "The Quiet Storm"... 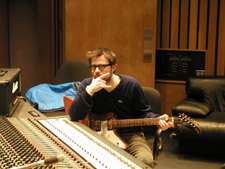 ...Maladroit action: ...both 107.7 in Seattle and Y-100 in Philly have been having weekend "Dope Nose" vs "Keep Fishin" fan voting events, and WFNX in Boston has gotten in on the action. Plus a host of other stations have been playing the new songs! (see previous updates, below)... also: