...French report pt 2... "...as pascal from france said it's crazy here but he forgot to mention NOW there is an advertisment on TV for the island in the sun single!! it says: "Island in the Sun of Weezer, the hit of the moment'...or something like that...!" ---oliver

...today we were stuck at the airport terminal for an extra hour or so because they were trying to fix the plane... Then they said "ok, its gonna be 6-8 hours till the mechanics can get the part...see the ticket counter for rescheduling...", but then, not 60 seconds later, they said "Oh! wait, they fixed it. You can board now..." We wondered what on Earth was so hard to fix, and then suddenly perfect. Not the most confidence boosting moment in the history of commercial aviation... 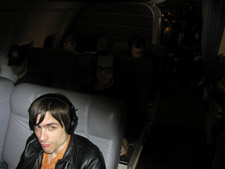 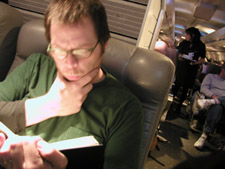 ...Brian knows that the guy snoozing next to Scott is James Van Der Beek. But Scott didnt have his Dawson-radar on...

...the "rock music | a tribute to weezer" album comes out today! see =rwa= news or dead droid records for the lowdown!

...a cool little new interview with Pat is at Mike's World of Weezer .