...Hyper Extended Midget Tour Show #6: Bryce Jordan Center, State College, PA:
somewhere out in the wilds of Pennsylvania they built this massive arena, so all the Penn State sports teams could do their thing in style. As we have seen, adapting a sports complex to the world of rock is do-able, and it was done well tonight. My ears detected an above average sound quality tonight, likely due to some arcane architectural detail originally intended to improve the 3 point line or something. The pit was split into 2 sides via the saftey "T" shape, and each side formed their own mini-mushy pits which spat out the surfers at random. "Why Bother" popped back into the set tonight. 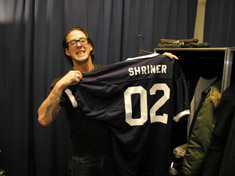 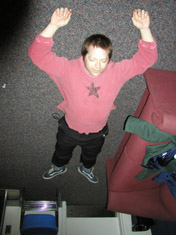 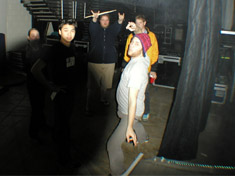 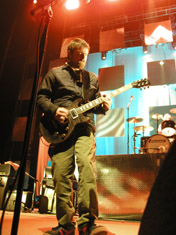 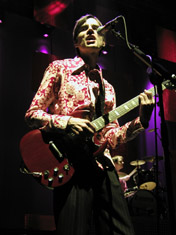 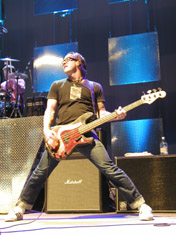 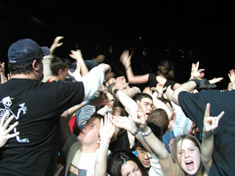 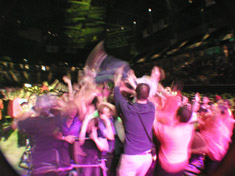 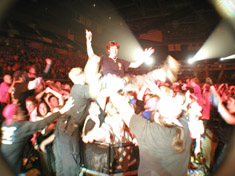 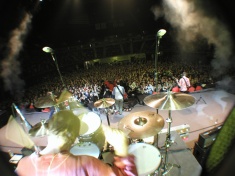 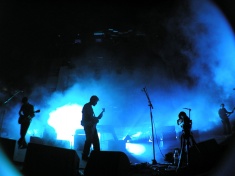 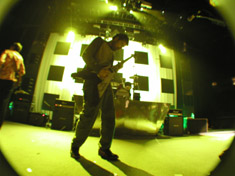 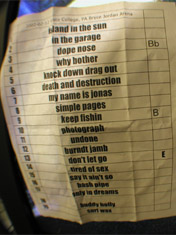 ...Olympic report! "...I went to the Women's downhill today, but arrived many hours early. They had huge speakers set up, and were playing a lot of rock music to pass the time. Weezer songs were played three times, with Buddy Holly, Don't Let Go, and Island in the Sun. Weezer's getting some international action thanks to the Olympics. ROCK ON!" ---Bert
...also several people reported that "Dont Let Go" was used on the Olympic TV broadcast of the Men's Halfpipe competition!

...crazy tale #1: "...The other day my boyfriend and I went out to grab some lunch...I'm waiting in my car (which is completely plastered with weezer stickers) and these guy park next to me. They get out, walk around to the back of my car and start laughing. They then walk past my window and one of them says loud enough for me to hear "The only place I'd put a weezer sticker is at the bottom of my toilet so I could c**p all over it" Well, being the dedicated fan I am, and always willing to defend my fav band, I tried to think of a way to get revenge. Then I remembered I still had a few leftover stickers in the backseat that didn't fit on my car...This was the point where I had the little devil on my shoulder saying "Do it!"....so I did. I stuck the nice bright green =w= sticker right on the back bumper of that lovely, expensive looking SUV. My boyfriend came out to find me snickering with childish delight, and we were able to make a clean getaway. The moral of the story....Don't ever insult weezer in front of a true weezer fan..." ---Danah

...crazy tale #2: "...i am a texture artist/character designer at a video game studio. our company made the x box game shrek....what im trying to get at is that i immortalized weezer in this game. on the crypt level if you go into the mausoleum and look at one of the grave stone engravings on the wall you will see that in the gibberish it says "weezer rocks". thats one of many weezer things throughout the game. Also another game that will be released soon is Pryzm:the dark unicorn for the PS 2. there is a character in that game who is carrying a leather satchel. if you look close at it you will see that the enscription on his strap has the flying w and also says my name is jonas...." ---ron