...tommorrow [fri 14th] is not only Valentine's day [happy V-day by the way!] but also weezer's 11th anniversary as a band, as well as what fans have come to call "International Weezer T-Shirt Day". People all over will be donning their weez-wear and heading off in search of others doing the same thing...

"...i made some nifty designs in honour of weezer's birthday on friday." ---kim [spiffy_kimbean from All Things Weezer] 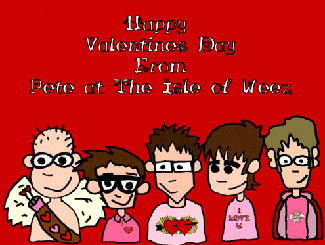 ...back...back into time...
The following goes for those of you who have seen a weezer show between 1992-1999 [anything from the early days up till the rc solo stuff in boston + the 2 '98 GP shows]. OR, if you KNOW someone who attended any show in that time period.

I am looking for TRUE, original and real stories of fan's perspectives on these shows, including interesting pre+post show events, meeting the band, etc. These tales will be added to the super chronology weezer history pages under the appropriate dates. This also goes for any [true + real] non-show encounter with the band or its individual members from '92-'99.

So, if youve got a story to share, email it to karl. As with the fan accounts that were used in karls corner news stories from 2000-now, the person who wrote the account will be credited [unless you want to remain anonymous] .....and thanks!

...looking for some serious [okay, very funny and cool] entertainment? Check out the Aibo Life visuals page...The 5th item down is a video clip that you MUST see! Enjoy! Thanks to Dean C., who made it all happen!