...its so hard to beleive that it was exactly 10 years ago today that i sat in a stuffy, smelly rehearsal room in West Los Angeles and watched the birth of the band who would soon name themselves 'weezer' (named just hours before their first gig a little over a month later). There was no way of knowing then that theyd be together even 6 months, let alone 10 years, but I heard something that day and told myself "wait a minute...i like this music, im not just saying that because these are my friends...this is cool!" It would be many months before the band was truly presentable, and fully 18 months before they secured a chance to be heard nationally. It seemed so odd to me that the cliche of going to L.A. to start a band and get signed, etc, was really happening to MY friends, out of the thousands of bands all trying to make it at the time. To still be with this band now, after all the highs and lows, and realize that we're just really getting into the swing of things...well, its just extremely cool. Thanks to all of you for sticking with us all this time....Well, its fun to wax nostalgic, but we're in the middle of a tour, and the rock doesn't stop for anything! (by the way, if you havent checked out our 10th anniversary frontpage, take a look!)

...thanks for all your International Weezer Tshirt Day stories, and for flying the weez colors today! I think that this is the best day to do this every year, as its a birthday of sorts, plus you can send out valentines and eat chocolate. Some notes of interest:

...Hyper Extended Midget Tour Show #7: Copps Arena, Hamilton, Ontario, Canada:
What better place to do a big Canadian Weezer show than at a giant hockey arena! Copps Arena is just an impressive looking place, with really steep balconies full of Brady Bunch colored seats, which were rarely occupied by the very willing to stand up and boogie crowd. The stoke factor was HUGE and the people were on the floor were getting their mosh on like nobody's business. Pat reported some minor drum frustrations tonight (not that that stopped him from blasting out the beats), which was about the only negative news of the otherwise epic night. 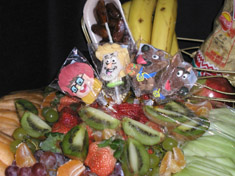 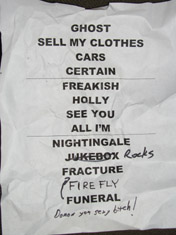 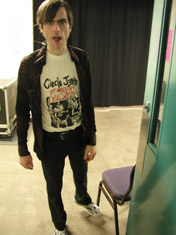 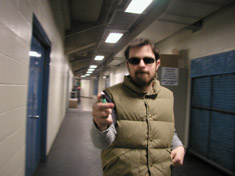 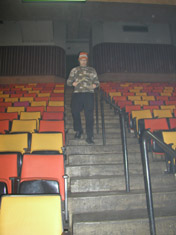 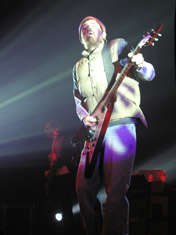 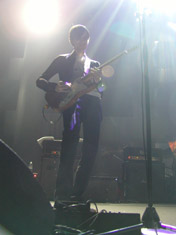 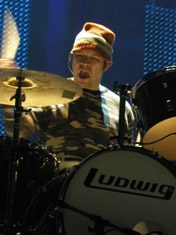 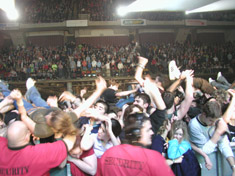 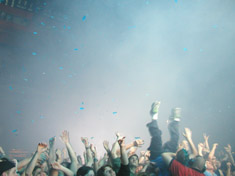 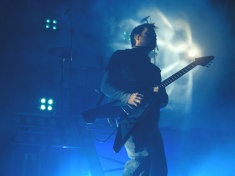 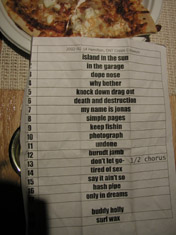 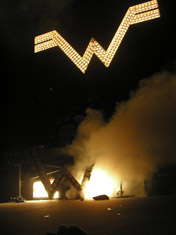 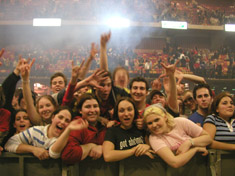 ...the people speak out! Here's a fan's response (sent in to MTV.com) to the MTV.com review of the Continental Airlines Arena show...

"When I got to the end of this review and saw that it was written by
Gideon Yago, I had to laugh. The thing is, I think he's still crying over the
fact that Weezer didn't play the 'kiss ass band being interviewed by the
ultra-hip and cool reporter' in the 7/17/01 interview. He guises his scorn
with a few "generous" adjectives here and there, but truthfully he's so sore
he's wearing Desitin. Even if this analysis is wrong, the rest of my
commentary still stands. I say that once in a great while a band comes onto
the scene that isn't in it for all of the fame and exultance and lines of
Mattel dolls. They're doing what they love, making music. And sometimes it
just so happens that this band is really talented, and they accumulate a
considerable fan base along the way. But this does not change their purpose -
the music. Weezer is one of these rarities - a meeting of four very talented
individuals who are doing a hell of a great job creating some rock. Being
such, I really don't care that they don't come out on stage and change their
outfits 55 times in one set. I don't care if they don't wanna try and make
conversation with a stadium full of 10,000 people. Pay attention - the music
they play at that show is so powerful you don't need any of the b.s. to walk
out of that venue in a trance. The fact that they will haul ass all over the
country (and not to mention over-seas) to bring us their music is reward
enough for me. So what if they don't want to play the game? That's not their
job. They are musicians providing us with a great service. If Yago doesn't
like it, he can save his money for some other "boy band" show." ---Hannah

...similar sentiment was seen in a recent New York Times review of the same show, from which the following quotes were pulled ("Hailing Kiss and Trying to Turn Into Kiss" by Jon Pareles):

"...Though Weezer doesn't want to pander to fans, it didn't neglect the music.
Songs grappled their way toward apologies, kiss-offs, vows of love or
recriminations; guitars surged and blasted between deceptively blithe
vocal ooh-wee-oohs. Love (from a girlfriend or from the public) never
sounded easy or secure...."

...yet another new interview/article to check out... here.