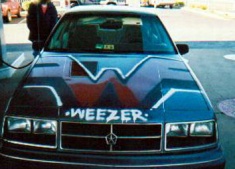 While literally every track from "Maladroit", the barely finished new Weezer album, has gotten play on both commercial and college stations around the country, it is "Dope Nose" that is breaking away from the pack big-time now. In addition to this weeks official adds at KROQ Los Angeles and 94.7 Chicago, and the unofficial play on big stations like Q101 WKQX Chicago; WPGU 107.1, IL; 102.1 Dallas; 99x Atlanta; Live 105.3 San Francisco; and 107.7 The End, Seattle; "Dope Nose" is starting to get a lot more play all of a sudden in...

"...i can see all the world is playing some Maladroit stuff, but France only [now] starts discovering the Green Album! Indeed, the "island in the sun" single is #24 (1st rock single) and is the most popular rock song of the moment: it is aired on every god***n radio station, BUT, what makes it a clasical rock song, is the constant airing on the [program] called "laugh and songs"! They only play old songs or, if new, songs that are about to turn to classical ranking! So, if your song is played there, [then] it's [considered] a classic....the green album has reached its highest position in the charts this week! it's the #5 rock album! i think it's not about to stop here, and maladroit is out in 2 months!! they may get 2 albums in the charts and that's cool. also the whole press is backing the band :the intellectual press are fans and Rocksound [major music magazine] said it was the "album of the year"
it's cool!..."
--pascal